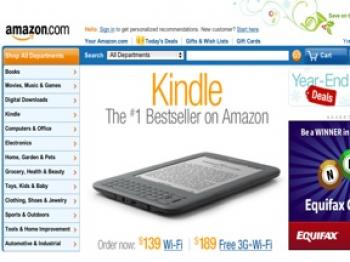 Caroline Dobson
View profile
Follow
biggersmaller
Print
Online shopping has been a popular option for shoppers during the holiday season.

In the U.K., Boxing Day shopping on the Internet was at record levels according to analysts. According to the Telegraph, 5 million people opted to purchase goods online resulting in an estimated $236 million in sales. Retailers like Tesco (Britain’s largest food retailer and the world’s fourth-largest retailer), Marks and Spencer, and John Lewis commenced their winter sales earlier through their websites.

However, price sensitivity is not necessarily the deciding factor for customer preferences. A new industry report has ranked holiday winners and losers among major online shopping platforms based on customer satisfaction.

"Retailers are slashing prices this time of the year to attract customers, and not all of them need to be doing that," said Larry Freed, president and CEO of market research firm ForeSee Results in a survey.

For instance, United States-based Wal-Mart and WalMart.com, the world’s largest retailer by sales, was considered one of the most competitive in terms of holiday discounts with complimentary delivery services on the bulk of its goods.

Although customer feedback was strong due to the superior online satisfaction score, Amazon.com, the e-retail giant, was found to be more appealing. The world’s largest online store scored better than Wal-Mart because it performed well in three measured drivers, or elements, of website satisfaction: content, functionality, and merchandise, and they are tied on consumers' perceptions of their prices.

In the battle of PC manufacturer websites, Apple Inc. continues to dominate Dell Inc. and Hewlett-Packard Co. Apple defies conventional wisdom because it achieves the highest customer satisfaction despite scoring below its rivals on perceptions of prices. However, Apple scores much higher than the others in website functionality, which is the most important driver of customer satisfaction for all three websites.

"The holiday shopping season is the time of year that retailers have the most exposure to the broadest spectrum of consumers," said Kevin Ertell, vice president of retail strategy at ForeSee Results. "And because customer satisfaction is predictive, this study is a great opportunity for retailers to see how they measure up to the competition and figure out what they need to do to drive sales well into the next year."

Amazon has managed to top the list and has had consistent feedback year after year. The Seattle-based retailer confirmed that the third-generation Kindle e-reader has become its best-selling product ever, even exceeding the number of the final Harry Potter book sales.

"So many people own a Kindle, yet it's still constantly featured on its home page, most retailers would have taken it off by now and put something else there," he says. "But consumers look past it. And it's not just the biggest site, it continues to grow the most, including the biggest percentage growth. That's just incredible."