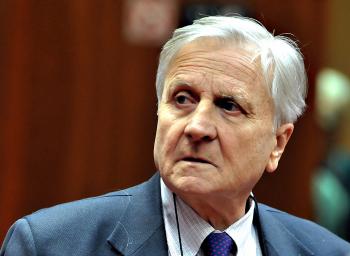 WORRIED: European Central Bank president Jean-Claude Trichet looks on at the ECOFIN Council meeting on Nov. 28 at the EU headquarters in Brussels. Economists fear that Ireland's recent financial woes may spread to other regional economies such as Italy and Spain. (Georges Gobet/AFP/Getty Images)
Business & Economy

Last month, Ireland publicly admitted that it is on the ropes and has asked and received a bailout fund—a generous 85 billion euro (US$113 billion) package to help relieve its heavy debt situation and put the economy back on its feet. This is already the second bailout in the European Union (EU), following the Greek debt tragedy that has cost the EU 110 billion euros worth of rescue funds.

This is however far from the end of Europe’s crisis—all eyes now fall on Portugal, which is seen as the next member in line for a bailout fund.

Famous U.S. economist Nouriel Roubini—who predicted the impending credit crisis before 2007—is of the opinion that Portugal could be the next bailout candidate.

“It is becoming increasingly likely,” said Nouriel in an interview with the Portuguese press.

"Like it or not, Portugal is reaching the critical point. Perhaps it could be a good idea to ask for a bailout in a preventive fashion." He is also of an opinion that Spain "is too big to fail and too big to save.”

"As such, if things turn out of control as seems possible with Portugal, [Spain] should do everything possible to improve its situation," he said in a statement.

It is questionable if Portugal will be able to pay 10 billion euros (US$13 billion) in bonds that mature in the first half of 2011. Meanwhile, the yield on Portuguese bonds has fallen 7 basis points to 6.93. In practical terms this means that it is getting harder for Portugal to borrow money, as its government bonds are becoming unattractive to investors.

“The market’s attention is likely to turn to Portugal’s sovereign debt, which at current levels of interest rates and growth rates is less dramatically but quietly insolvent,” wrote Willem Buiter, Citigroup Inc.’s chief economist, in a report dated Dec. 1. “We consider it likely that it will need to access the European Financial Stability Facility soon.”

In spite of continuing pressure to convince Portugal to ask for a rescue fund, Portuguese Finance Minister Fernando Teixeira dos Santos said that the EU can’t just impose a bailout on his country.

“There are those who think that the best way to preserve the stability of the euro is to push and force the countries that at this moment have been more under the floodlight to that aid,” said Teixeira dos Santos to Jornal de Noticias in an interview. “But that is not the vision or the political option of the countries that are involved,” he added.

Portugal’s neighbor, Spain, the last member of an infamous PIIGS group (Portugal, Ireland, Italy, Greece) is also feeling debt pressure. Only the danger with Spain is that its economy is bigger than Portugal, Ireland, and Greece combined. If Spain requires a bailout, it would be a significant amount, bigger than the total 750 billion euros fund currently provided by the EU.

“The big elephant in the room is not Portugal but, of course, it’s Spain,” said Roubini. “There is not enough official money to bail out Spain if trouble occurs.”

“In case of an escalated debt crisis in Spain, the European Central Bank (ECB) must help to purchase its government bonds and also backstop its banking system,” said Willem Buiter in a statement. “Once Spain needs assistance, the support of the ECB will be critical,” he added.

In the face of all those debt troubles and upcoming bailouts, the euro is experiencing large fluctuations as investor confidence dips to and fro, leaving the EU economy vulnerable and unpredictable. It remains to be seen how long Germany and other EU powerhouses can leverage the bitter share of rescuing their less successful members.