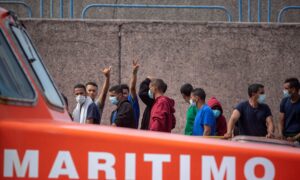 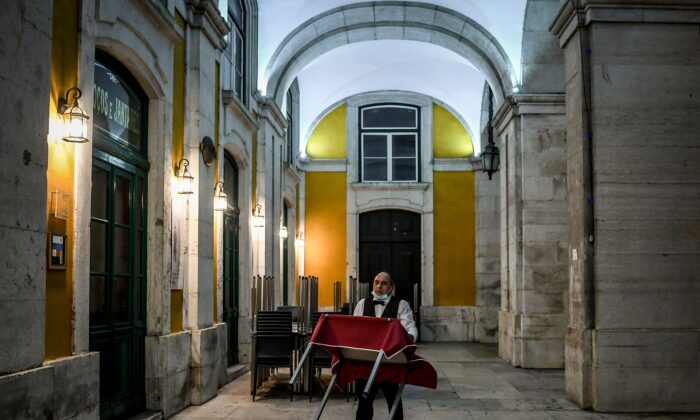 A waiter carries a table just as he prepares to close a restaurant in downtown Lisbon, Portugal, on Nov. 9, 2020. (Patricia De Melo Moreira/AFP/Getty Images)
WORLD

Portugal on Monday entered a 15-day state of emergency and imposed curfews in parts of the country to curb the spread of the CCP (Chinese Communist Party) virus as the number of cases hit a record high.

Prime Minister Antonio Costa announced the development in a press conference, noting that residents in 121 municipalities—home to around 70 percent of Portugal’s population—will not be able to leave their homes between 1 p.m. and 5 a.m. during the next two weekends. This is in addition to weekday curfews, which run from 11 p.m. to 5 a.m. The state of emergency can be extended indefinitely in 15-day periods.

“We cannot have the slightest doubt that everything must be done to contain the pandemic,” Costa told a news conference late Sunday. “If we fail to do so, we must increasingly adopt more restrictive measures and compromise the month of December.”

Several dozen restaurant workers in Porto protested against the restrictions, which they said would hurt the sector, Reuters reported. On weekdays, restaurants have to shut at 10:30 p.m. and over the next two weekends they can only provide takeaway services after 1 p.m.

Portugal has recorded a relatively low 179,324 cases and 2,896 deaths, but infections hit 6,640 cases on Saturday, the highest daily figure since the outbreak of the pandemic. The COVID-19 death rate per 100,000 population in Portugal is 5.6, according to the European Center for Disease Control.

“There’s no end in sight,” said Fernando Maltez, a Portugese infectious disease expert who oversees a ward at Lisbon’s Curry Cabral Hospital. All 20 ICU beds set aside for COVID-19 patients at the hospital are now occupied.

“No health service in the world … can withstand a deluge of cases that just keeps coming,” he said.

Portugal is the latest European country to ramp up restrictions amid a surge in CCP virus cases.

The United Kingdom entered its second national lockdown on Nov. 5 and has been recording around 20,000 new daily infections. France, one of the hardest-hit European countries, on Monday noted over 125,000 new daily cases, according to Johns Hopkins University figures. Under the lockdown in France, people can only leave their homes to go to work or school, for one hour of exercise per day, and for necessities like seeking medical attention or buying essential goods.

Much of Eastern Europe, spared the harrowing wave last spring, is in the same position. Hungary warned its ICU would run out of space by December under the worst-case scenario, and hospitalizations in Poland have risen to three times the levels seen in the spring. Late last month, American National Guard troops with medical training headed to the Czech Republic to work alongside doctors there, and the mayor of Prague took shifts at a hospital.

Hungary will impose a partial lockdown that includes expanding the current night-time curfew to run from 8 p.m. to 5 a.m. Hungarian Prime Minister Viktor Orban said the month-long restrictions would also curtail public gatherings and involve the closure of schools and restaurants.

In a video message cited by Reuters, Orban warned that “if coronavirus infections rise at the current pace… Hungarian hospitals will not be able to cope with the burden.”