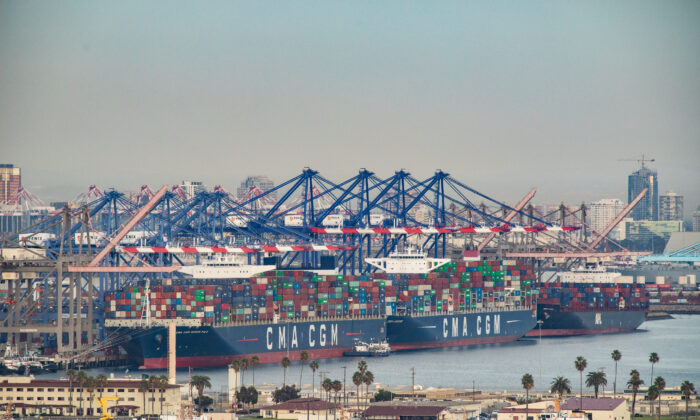 Ships wait to be offloaded in the ports of Los Angeles and Long Beach on Jan. 12, 2021. (John Fredricks/The Epoch Times)
Southern California

Ports Try New Fines to Deal With a Container Tsunami

The new surcharge applies to shipping containers held for longer than usual on a growing flotilla of ocean carriers that now number 76 off the Southern California coast.

The fee will increase by $100 increments per container per day until it is cleared. Charges begin Nov. 1.

Officials said they hope the fines will incentivize shipping companies and truckers to move goods more quickly away from the terminal.

Ships offshore on Oct. 26 held about 250,000 containers, according to Port of Los Angeles spokesman Phillip Sanfield.

“That’s equal to about two weeks of work, so, it’s not some number that’s going to clog us for months,” Sanfield told The Epoch Times.

The ports are not looking to profit off of the surcharge, he said. “We’re looking to get the cargo off of our docks.”

The ports have made several changes in the past few months to speed up this part of the supply chain.

The lockdowns amid the CCP virus pandemic caused an increase in consumer buying that continued to rally after additional stimulus funding this year. The ports have experienced overwhelming volumes throughout 2021 and have averaged 900,000 containers per month since summer 2020.

Terminal operators and longshore workers are working on about 50 percent more ships than before the pandemic, Sanfield said. Containers are stacked and crowding the tarmacs, while ports are dealing with the historic backlog of anchored ships waiting to come onshore.

Both ports are being equally impacted.

“With the escalating backlog of ships off the coast, we must take immediate action to prompt the rapid removal of containers from our marine terminals,” said Port of Long Beach Executive Director Mario Cordero. “The terminals are running out of space, and this will make room for the containers sitting on those ships at anchor.”

Other local officials on Oct. 26 said they hoped the new charge would prompt faster removal of containers from the ports.

Valerie Contreras, chair of the Wilmington Neighborhood Council—a small community adjacent to the Port of Long Beach—said her city has been overrun by shipping containers and trucks.

“It definitely [will provide] incentive for the drivers to quickly do what they need to do to get those [containers] off the terminal. I’m afraid it’s going to have a huge impact on my community, as it had been,” Contreras said.

Neighborhoods in Wilmington have become clogged with shipping containers lately as drivers attempt to find anywhere to drop off the trailers from the terminals, she said.

The problems are also exacerbated by empty containers piling up around the port areas.

Harbor Trucking Association CEO Matt Schrap told Fox Business that the ports and the White House “should be commended for digging in and looking at creative ways to get the ocean carriers engaged,” but said the fees may encourage vessel operators and their marine terminal partners to prioritize chassis availability for carrier cargo subject to the fee.

The surcharge may leave other cargo without equipment and empty containers stranded in trucking company yards, he said.

Schrap added that ships should be encouraged to send what’s known as “sweeper vessels” to clear out the abundance of empty containers taking up space on the dock.

“This new fee on goods raises many questions about the implementation process, the potential for delays and the cost increases that could result,” said Michele Grubbs of the Pacific Merchant Shipping Association.

A representative of a new task force created by the Biden administration to deal with the issue said it supports the surcharge.

“As our economy continues to grow, increased demand and disruptions caused by the pandemic are putting our supply chains to the test,” said John D. Porcari, who serves as the “port envoy” on the recently created “Biden-Harris Supply Chain Disruptions Task Force. “While we’ve seen new records set in terms of [material] this year at West Coast ports, we need more players throughout the supply chain to keep stepping up.”

Fees collected will be reinvested by the ports for programs designed to enhance efficiency, accelerate cargo velocity, and address congestion impacts throughout the bay.