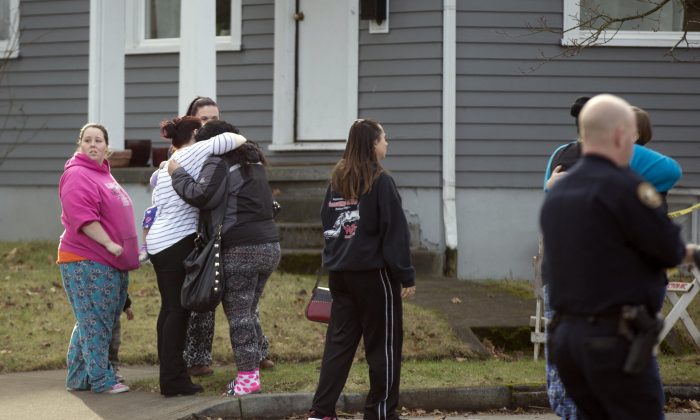 Family members greet their children who were escorted out of Rosemary Anderson High School in North Portland after a shooting on Dec. 12, 2014. A shooter wounded two boys and a girl outside a U.S. high school Friday in what is believed to be a gang-related attack, police said. (AP Photo/The Oregonian, Kristyna Wentz-Graff)
Crime and Incidents

Portland School Shooting: “The nexus of it had to do with gang activity,” Says Official

PORTLAND, Ore.—A 22-year-old man arrested in connection with a shooting outside an alternative high school in Portland had ties to a gang, as did two of the victims, police said Saturday.

Sgt. Pete Simpson said Lonzo Murphy is a “person of interest” in the Friday shooting, but officers aren’t prepared to say whether he was the gunman, Simpson said.

Authorities are trying to find two other people connected to the shooting near Rosemary Anderson High School. Three were hospitalized, including a 16-year-old girl who was critically wounded, and a fourth person was grazed by a bullet and treated at the scene.

“The nexus of it had to do with gang activity,” Simpson told reporters outside police headquarters. “The proximity to the school was happenstance, if you will. It doesn’t sound like it had anything to do directly with the school.”

Investigators received information that led them to look for Murphy, Simpson said. He was pulled over early Saturday and arrested on a parole violation. Officers found a handgun “consistent with what we were looking for related to this case,” Simpson but officers can’t say yet whether it was tied to the shooting.

After the arrest, investigators searched Murphy’s apartment, which is located five blocks from the shooting scene.

School officials planned to hold an open-house on Sunday so students, staff and community members could drop in, be together and get support, the Oregonian reported.

Olyvia Batson, 17, was treated at the scene after a bullet grazed her foot.

Zimmers and Batson have no apparent gang affiliations, Simpson said.

Gang violence in Portland isn’t new. Some of the violence occurs between rival gangs, but bystanders have also been hurt.

Portland police have said they saw a spike in gang crime over the summer and have complained they don’t have adequate resources to address the problem. A man died in a drive-by shooting in June and another man was killed in a separate shooting. A 5-year-old boy also was shot in the leg while playing at an apartment complex.

A Multnomah County report on gang activity released in June said crime in the county that includes Portland actually decreased from 2005 to 2012. As inner-city Portland gentrifies, the report said, criminal activity is shifting from northern neighborhoods to areas farther east, including the city of Gresham.

The north Portland neighborhood where the most recent shooting occurred exemplifies the trend. Before Friday, the place once known for gangs had not had a shooting with injuries in nearly four years.

There was another school shooting in the Portland area in June, but it was not gang-related. A freshman killed another boy in a locker room, and a bullet grazed a teacher before the shooter went into a bathroom and died from a self-inflicted gunshot, police said.