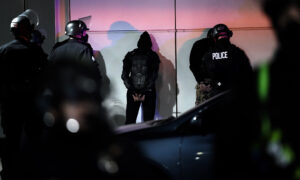 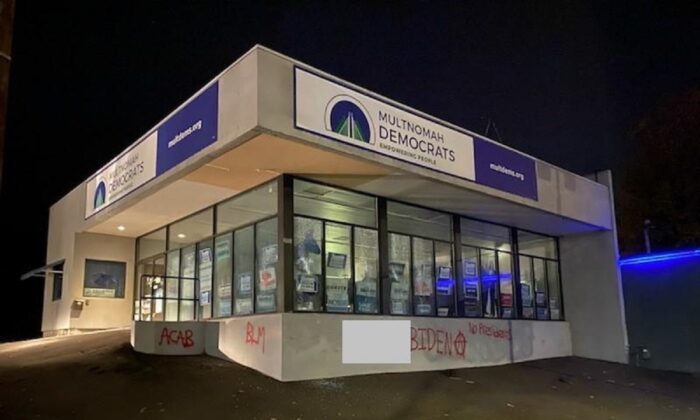 The Multnomah County Democrats building was attacked by rioters in Portland on Nov. 8, 2020. (Portland Police Bureau)
Crime and Incidents

Rioters in Portland late Sunday broke windows and sprayed graffiti at a building used by Democrats, just days after the 2020 election.

A crowd of black-clad, mostly masked people gathered in Laurelhurst Park before marching to the Multnomah County Democrats building, the Portland Police Bureau said in an incident summary.

Several members of the group began to tag the building with graffiti. The crowd also smashed about half a dozen windows.

Under the August policy change from Mike Schmidt, the new county district attorney, the charges will likely be dropped.

Protests and riots have taken place in Portland, Oregon’s largest city, nearly every night since May.

A number of those involved are members or supporters of Black Lives Matter or Antifa, an anarcho-communist network of groups.

The PNW Youth Liberation Front, an Antifa-linked organization that has helped organize demonstrations, cheered the damage inflicted on the Democrats building.

The organization shared an independent reporter’s missive, which said: “The group’s message was very clear: the Democratic Party had not represented their views. No party would, no president would.”

Graffiti on the building included “Biden” with the anarchist symbol next to it and “No Presidents.”

“ACAB,” an anti-police slogan, and “BLM,” or Black Lives Matter, were also sprayed.

The Multnomah County Democrats haven’t commented on what happened. The group didn’t respond to a request for comment.

The riot came one day after a crowd of several dozen gathered at the Immigration and Customs Enforcement facility in Portland, where they faced off with federal agents.

On Nov. 6, protesters targeted the home of City Commissioner Dan Ryan, who proved to be the deciding vote against a proposal to slash funding for the police.

President Donald Trump has condemned the unrest in Portland and urged city and state officials to accept federal assistance to quell it, but the officials have declined.

Democratic presidential nominee Joe Biden, who is vying to beat Trump, has not reached out to Portland or Oregon officials regarding the monthslong situation.

“They can in fact take care of it if he just stays out of the way,” he added, referring to Trump.

Oregon Gov. Kate Brown, a Democrat, had created a unified command of city, county, and state law enforcement earlier this month ahead of expected unrest on and after Election Day. She also activated the Oregon National Guard because of violence in Portland for the first time since the demonstrations started in May.

“I would like to thank Oregonians for expressing their free speech rights largely through joyful celebrations yesterday,” she said in a statement. “I’d also like to thank the city, county, and state law enforcement officers, as well as the Oregon National Guard volunteers, who worked over the past several days and nights to keep the peace and protect free speech in Portland.”