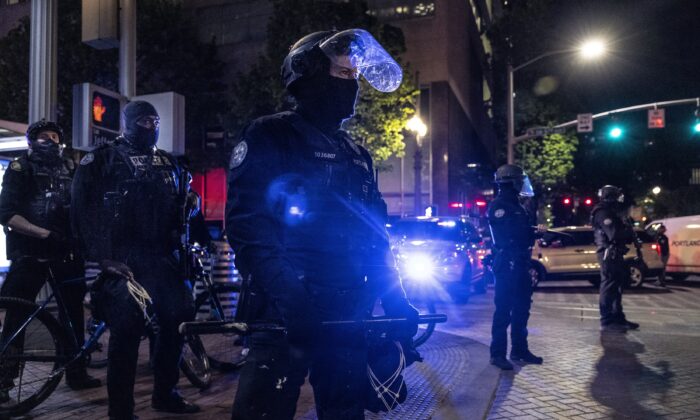 Rioters in Portland in the wake of the verdict in Derek Chauvin’s trial started a fire and attacked businesses on April 20.

An Antifa symbol was spray-painted on one of the broken windows. Antifa is a far-left, anarcho-communist network that has members in Portland.

“Cops kill” and “stolen land” were also scrawled on the buildings.

Starbucks didn’t respond to a request from The Epoch Times for comment.

During the evening, a crowd started a dumpster fire near the Justice Center and blocked traffic, prompting authorities to lock the center to prevent unlawful entry into the building.

At approximately 10:07 p.m., an officer was wheeling his bicycle on the sidewalk when a person stepped in his path. The sergeant moved the person aside and kept walking, but was then punched in the face by another person.

“The sergeant landed in a dangerous position, underneath the suspect and on his back. That’s when other officers moved in to stop the assault. In response to the violent conduct, some focused blows were used. Pepper spray was also deployed by an officer. After the suspect was handcuffed, officers rendered aid to help alleviate the effects of the pepper spray,” the Portland Police Bureau stated in a news release.

The suspect was arrested and identified as Randy Gray, 36. He was charged with assaulting an officer, among other charges.

One other arrest was made.

Fliers for the night’s activities were circulated by far-left radicals that stated, in part: “We got the verdict now George Floyd can rest in peace! But we can’t forget about the others. Celebration of George’s Life and All Out for Duante Wright.”

Wright was fatally shot by a police officer earlier this month in Brooklyn Center, Minnesota, after resisting arrest. The officer, Kim Potter, resigned and was charged with second-degree manslaughter.

Chauvin, a former Minneapolis police officer, was convicted on April 20 on all three counts in Floyd’s death.

Acting Portland Police Chief Chris Davis said in a statement after the verdict was announced that he believed Chauvin’s actions were “beyond the bounds of the law and what we expect of police officers in the performance of their duties.”

Portland Mayor and Police Commissioner Ted Wheeler said before the verdict that he hoped Chauvin would be convicted of murder.

Police declared an unlawful assembly after the destruction, and demonstrations began winding down, the bureau stated. The area affected by the criminal activity was contained within a few blocks.

Hours before the rioting, Wheeler declared a state of emergency.

The declaration gave police flexibility in responding to violent demonstrations.

Wheeler and other elected officials urged anarchist groups not to continue the rioting that they have fomented in Portland since spring 2020.

“A significant threat to our ability to recover from the COVID-19 pandemic towards a more equitable and inclusive Portland is the group of 100 or so largely white self-described anarchists who engage in the criminal destruction of our economy and our confidence,” said Wheeler, a Democrat.

“We all recognize the need for change in our public safety and criminal justice systems. We need to own up to the harms those systems have done in the past. Violence and destruction don’t have anything to do with this. People have a right to free speech. They also have a right to be free from violence and anarchy in their communities. We will do everything we can with the resources we have to protect the safety and uphold the rights of all.”

Rioters damaged a slew of establishments the prior evening, including a Boys & Girls Club.

Terry Johnson, the club’s CEO, told KOIN that roughly $20,000 in damage was inflicted.

“They’re hurting the kids who are being impacted by social injustice, the very thing that people are protesting about,” Johnson said. “When they disrupt our programming, then they’re perpetuating that harm that’s happening because of the reform that’s needed in our country.”