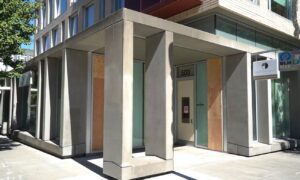 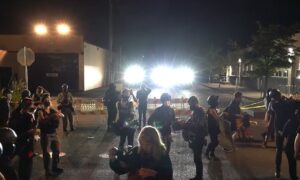 3 Arrested After Crowd Throws Rocks at Police in Portland
0 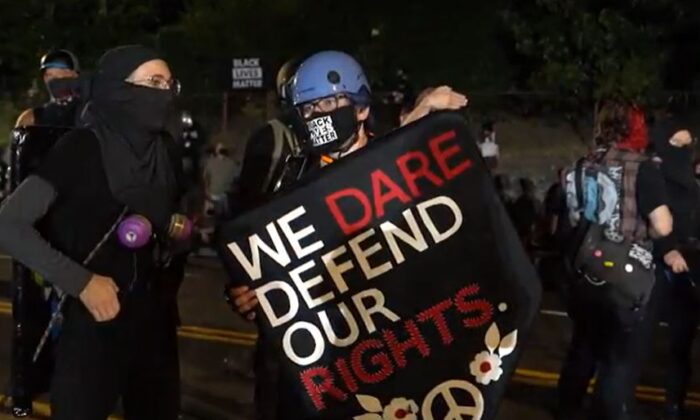 In this still image from video, demonstrators stand near the Penumbra Kelly Building in Portland, Ore., on Sept. 3, 2020. (Roman Balmakov/The Epoch Times)
Crime and Incidents

Police arrested some rioters in Portland overnight Thursday after they targeted a sheriff’s office and ignored warnings not to trespass on the property.

The group gathered at a park before marching to the Penumbra Kelly Building in southeast Portland around 9:30 p.m. The event was organized by groups linked to Antifa, a far-left, anarcho-communist network.

People blocked the street in front of the Multnomah County Sheriff’s Office building and went onto the property despite warnings about facing arrest or crowd control if trespassing.

Others in the crowd hurled rocks and other projectiles at the building, officers, and police vehicles. Some sprayed graffiti on the building.

Just before midnight, officers finally confronted the crowd, making targeted arrests of those who threw rocks, according to an incident summary from the Portland Police Bureau. Two people were arrested: Sean Devlin O’Neill, 29, for criminal mischief and disorderly conduct, and Amanda Lundbom, 37, for interfering with an officer and failure to display a driver’s license.

Video footage showed a car speeding past the crowd, igniting anger. Police officers found the vehicle and cited the driver.

Officers targeted so-called support vehicles, which include vehicles without license plates or with duct tape covering license plates that are positioned across roadways to help rioters shut down streets. Several were cited and one was towed.

The crowd mostly fizzled out by 2 a.m.

The crowd was mourning the death of Michael Reinoehl, who was killed by law enforcement officers in Washington state late Thursday. Reinoehl was a suspect in the murder of a man in downtown Portland over the weekend.

“Just tonight they killed our brother Mike,” one man said.

Reinoehl was a supporter of Antifa and Black Lives Matter who said earlier this summer that he was prepared to go to “war.” In an interview recorded in the past few days, the man claimed he shot dead Aaron “Jay” Danielson late Saturday in self-defense.

Protests and riots have taken place every night in Portland since May 28.

Kelley allegedly shined a laser in a police officer’s eyes. He was booked on assault, unlawful use of a weapon, and unlawful directing of light from a laser pointer charges.

“An assault on the police is an assault on the community we are sworn to protect. I commend the officers out there every day and night, and detectives whose follow up makes arrests like this possible. Anyone hiding behind legitimate protests to commit acts of violence should know the investigations keep going even if you get released after your initial arrest,” Police Chief Chuck Lovell said in a statement.

Investigations from the bureau have led to five civil disorder charges, including one against a man who had been arrested during four nights of unrest but only charged by local prosecutors once.

The U.S. Marshal’s Service cross-deputized many of them in another apparent effort to skirt a recent policy change from Multnomah County District Attorney Mike Schmidt.

Schmidt announced last month that his office would likely not pursue a number of charges, including riot and disorderly conduct.

“This policy acknowledges that the factors that lead to the commission of criminal activity during a protest are incredible complex. The protesters are angry, yes, deeply frustrated with what they perceive to be structural inequities in our basic social fabrics. And this frustration can escalate to levels that violate the law,” Schmidt told reporters.

“OSP is not criticizing any officials and we respect the authority of the District Attorney, but to meet the Governor’s charge of bringing violence to an end we will use all lawful methods at our disposal,” a state police spokesman told The Epoch Times this week.