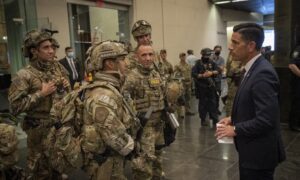 DHS Chief Travels to Portland, Says City is 'Under Siege'
0 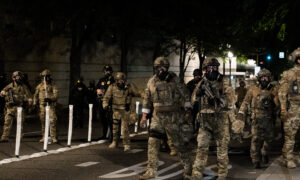 Portland Police Association Building Burned During Another Night of Rioting

The Portland Police Association’s office building was set on fire over the weekend as rioting continued in Oregon’s largest city, with no signs of easing.

Rioters broke into the association’s office around 10:45 p.m. on July 18, according to the Portland Police Bureau, while others blocked nearby North Lombard Street with dumpsters, which were soon also lit on fire.

Within a few moments of the break-in, the rioters, many of whom wore helmets and carried clubs and shields, ignited a fire inside. As the fire was set, some chanted, “black lives matter!” Video footage showed a desk in the building on fire, which police officers were able to put out later.

As police officers arrived to respond to the break-in and arson, most of the rioters fled.

Officers declared the situation a riot “due to the violent conduct of the large group creating a grave risk of public alarm,” the bureau said in a statement.

Officers and rioters clashed. People in the crowd hurled projectiles, including rocks, smoke bombs, and paint-filled balloons, injuring some officers.

At the same time, a different crowd of hundreds of people was downtown, barricading doors around the Mark O. Hatfield U.S. Courthouse. They used fencing that had been erected around two city parks where people tried establishing a so-called autonomous zone.

While most of the group’s energy was focused on the federal courthouse, others blocked a gate to the Justice Center, which typically houses several hundred inmates and police officers.

Federal officers deployed tear gas and other crowd-control measures in response, according to video footage from the area.

The Portland Police Association didn’t respond to a request by The Epoch Times for comment.

Portland officials are trying to get federal officers to stop making arrests and ultimately leave the city.

Federal officials have pushed back. Acting Department of Homeland Security Secretary Chad Wolf, who traveled to the city on July 16, said he wouldn’t order officers to withdraw.

“A federal courthouse is a symbol of justice—to attack it is to attack America,” he said in a statement, referring to the Hatfield courthouse, which has become the epicenter for many of these protests.

“This failed response has only emboldened the violent mob as it escalates violence day after day.”

Portland Mayor Ted Wheeler, a Democrat, told reporters in a virtual briefing July 17 that he wasn’t invited to meet with Wolf, and wouldn’t have met with him even if he was invited.

Things appeared to be winding down before federal officers stepped up their enforcement, Wheeler asserted.

Turner has spoken out against Wheeler and other officials. In a statement released July 8, he said the police union has “no confidence that City Council will stop the rioting and looting and protect the safety and livelihoods of all Portlanders.”

Officers have been called “murderers,” “pigs,” and “white supremacists” by activists and others, including members of the council, Turner said, urging Councilmembers to remind people that officers are humans and to stand up to condemn the violence unfolding in the streets.

Wheeler is also the police commissioner.

Hardesty, who has supported defunding the Portland police department, called on Wheeler to transfer control of the police to her.

“We know that Portland Police Association President Daryl Turner met with DHS Secretary Chad Wolf. We know Portland Police are collaborating with this federal occupying force,” she said in a statement.

Wheeler should stop denying that violence is perpetrated by his own officers and urge the police not to collaborate with federal officers, Hardesty said, adding: “I demand action right now. Mayor Wheeler, if you can’t control the police, give me the Portland Police Bureau.”

Wheeler said July 18 that he directed staff who work for federal law enforcement to remove themselves from the police bureau’s incident command.

“While sharing a space helped facilitate clear communication, based on recent actions by federal law enforcement officers, I am not comfortable having them in our space,” he said.

Wolf responded July 19, calling the decision “dangerous” and arguing that it “puts lives at risk.”