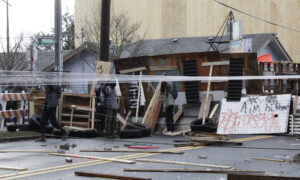 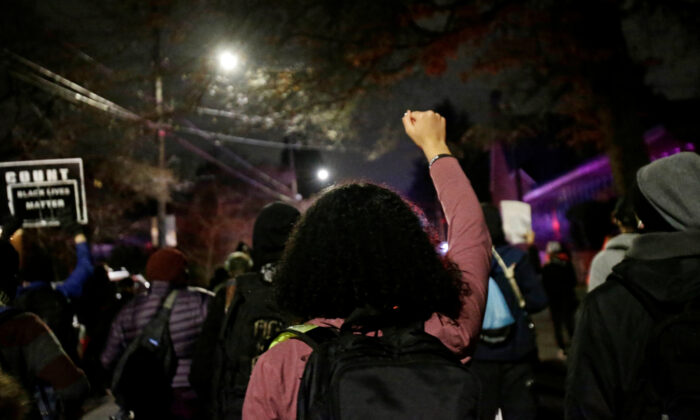 Activists attend a rally after the inauguration of U.S. President Joe Biden, in Portland, Ore., on Jan. 20, 2021. (Lindsey Wasson/Reuters)
Crime and Incidents

Police officers in Portland, Oregon, made eight arrests on Jan. 20 as agitators smashed windows and vandalized the offices of the state’s Democratic Party during rioting that took place just hours after the inauguration of President Joe Biden.

At least 150 people, some of whom were seen carrying the flag of the far-left, anarcho-communist group Antifa, gathered and participated in events “punctuated by violence and destruction” that began about two hours after Biden took the oath of office to become the 46th president of the United States, according to the Portland Police Bureau.

The crowd, mainly dressed in Antifa’s characteristic black, first gathered at Revolution Hall in southeast Portland, where they were met by police officers on bikes. They then marched to the Democratic Party headquarters and began smashing windows, applying graffiti, and later moving dumpsters in the street, lighting the contents of one on fire, police said in a statement.

A clip filmed by a journalist at the scene shows a person, dressed in all-black, walking through Portland streets carrying an Antifa flag. Antifa adherents commonly use this “black bloc” tactic to hide their identities.

Others held banners that had varying messages, including “We are ungovernable” and “A new world from the ashes.”

“To those gathered near the Democratic Party of Oregon Portland Headquarters: Members of this group have been observed damaging the building,” the bureau wrote on Twitter before arrests were made. “Anyone who is involved in criminal behavior including: vandalism and graffittiing [sic] is subject to arrest or citation.”

Journalist Andy Ngo shared footage on Twitter of people attacking a Portland police officer and flipping a car on its side.

The people, aged 18 to 38, were arrested on charges ranging from criminal mischief to possession of a destructive device, to riot, to reckless burning, the bureau said, noting that some of the charges were connected to the “extensive damage” caused to the Democratic Party of Oregon headquarters.

Of the individuals arrested, four are from Portland, two are from Albany, one is from McMinnville, and the other is from Vancouver, Washington. At least two people detained on Jan. 20 had been previously arrested and released.

The 22-year-old in May 2017 penned an article in which he described himself as a “social democrat … a leftist, but an alien among my leftist peers.”

Self-described Antifa member Davis Beeman, 38, was charged with rioting and disorderly conduct; in May 2020, he was charged with two misdemeanors of reckless driving and interfering with a peace officer.

The Democratic Party in a statement late on Jan. 20 said it was disappointed in the damage caused by the group to its headquarters.

“None of this should take away from the fact that today is a joyous day for America,” the party said.

In its latest update, the bureau said that further arrests were made following a separate gathering of some 150 people at the Immigration and Customs Enforcement (ICE) offices in the city.

“If you are exercising your free speech rights, do so peacefully. Vandalism, assault, and blocking traffic is not protected activity and people engaged in it are subject to arrest. For those protesting peacefully, thank you,” Allen had urged protesters earlier after an afternoon of arrests.

Former President Donald Trump earlier this month signed a memorandum to block the entry of individuals affiliated with the Antifa movement into the United States. The White House on Jan. 5 said that the violence spurred on by the group endangers the fabric of the nation.