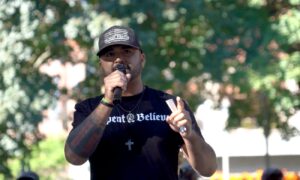 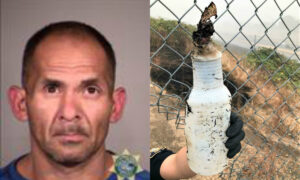 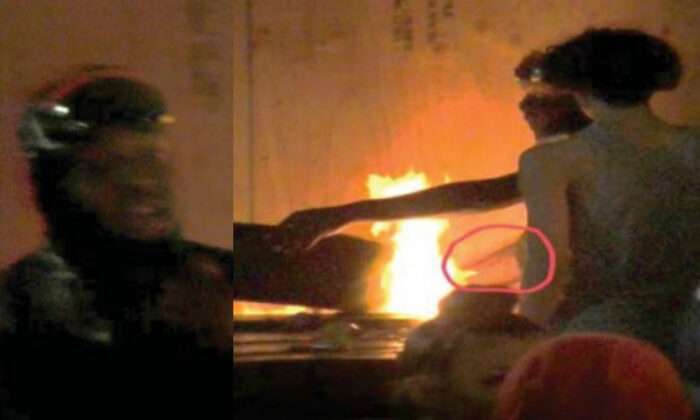 A man later identified as Gavaughn Gaquez Streeter-Hillerich participates in arson during a riot in Portland, Ore., on June 26, 2020. (ATF)
Crime and Incidents

A 22-year-old Portland man faces up to four decades in jail on a federal arson charge for allegedly setting a police precinct on fire on June 26.

According to a criminal complaint, the man was part of a group of demonstrators who gathered around the Portland Police Bureau’s North Precinct.

An individual later identified as Streeter-Hillerich was seen intentionally setting a fire at an outside corner of the building, authorities said.

“The fire was set on top of a large garbage dumpster that had been flipped backwards and pushed up against the wall of the building where plywood had been affixed to windows to minimize damage and/or prevent break-ins from the ongoing civil unrest,” an agent with the Bureau of Alcohol, Tobacco, Firearms, and Explosives wrote.

“Due to the fire, the building sustained damage in the form of peeling paint, soot deposition, burned plywood that was affixed to the window, and burn damage to the awning above. Officers used a fire extinguisher on the fire in an attempt to put it out. The smoldering fire was finally doused by firefighters using a hose.”

The building not only houses the police precinct, but a number of private businesses. The part of the building that was damaged by the fire houses a retail store called Mid-K Beauty Supply No. 1.

Video footage given to authorities by a private individual who chose to remain anonymous was used to identify the suspect. A tattoo on his arm helped authorities determine he was involved, as did a portion of the video that showed him not wearing a mask and vehicle records that led to a Facebook account he used under a fake name.

Streeter-Hillerich tried to light the fire and, before it got going, moved a tire so the fire would burn faster, and tried to prevent an onlooker from extinguishing the flames, according to the complaint.

Streeter-Hillerich told police officers that the original intent of the protest was to occupy the North Precinct. He also admitted that he ignited the dumpster and that he and others added flammable material to produce a more significant fire.

The lighter he was using didn’t work, he said, so another person ended up lighting the fire. He said he believed it would remain a “controlled fire” and was surprised when it spread, even though he knew people were pouring chemicals onto the flames they typically used to treat protesters’ wounds.

Streeter-Hillerich said he was angry that tear gas had been used against him.

The complaint stated: “He believed igniting the dumpster would assist him in controlling his anger and getting his anger out. When asked if he knew anyone else that was present at the fire, he advised some of the individuals were ‘anarchists’ and a couple of people were leaders with the Rose City Justice organization.”

Rose City Justice describes itself as a “black-led, community-born platform that mobilizes the public toward racial justice reform.” No contact information for the group could be found.

The public defender representing Streeter-Hillerich told The Epoch Times that he doesn’t talk about clients’ cases with the media.

The defendant was released pending further proceedings after appearing in court this week.