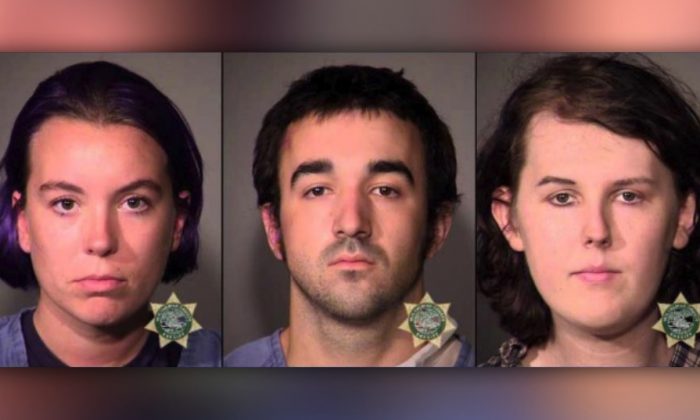 From left, police booking photos of Maria Dehart, Gage Halupowski and James Stocks. Halupowski was sentenced to nearly six years in prison on Nov. 1, 2019, after pleading guilty to assault. Stocks was recently sentenced to probation after pleading no contest to harassment. Dehart pleaded not guilty to harassment and disturbing the peace. The trio was arrested after Antifa and right-wing groups clashed on June 29, 2019, in Portland, Oregon. (Portland Police Bureau)
Crime and Incidents

A Portland-area reporter renowned for his coverage of far-left violence has been injured in an attack by alleged members of Antifa, leaving him hospitalized with a “brain bleed.”

Andy Ngo, an editor at Quillette and host of the podcast Things You Should Ngo, was reporting on Antifa street demonstrations in Portland, Oregon, on June 29, when black-clad assailants singled him out for a vicious assault.

In a shocking video posted by Jim Ryan on Twitter, Ngo is seen standing amidst a group of masked protesters as someone wearing a black hoodie leaps towards Ngo and delivers a blow to his face. Someone else then sprays Ngo with an unknown substance, while another attacker appears to kick the reporter in the groin.

“First skirmish I’ve seen,” Ryan wrote in his tweet. “Didn’t see how this started, but @MrAndyNgo got roughed up.”

As Ngo leaves the scene, someone winds up and throws a projectile at the journalist, which appears to strike him in the back of his head. Two more people are seen in the video dashing towards Ngo and throwing items at him.

In a tweet, Ngo wrote: “Attacked by antifa. Bleeding. They stole my camera equipment. No police until after. waiting for ambulance . If you have evidence Of attack please help.”

“On way to hospital,” he wrote in a follow-up. “Was beat on face and head multiple times in downtown in middle of street with fists and weapons. Suspects at large.”

Ngo later posted an update showing the extent of his injuries, saying he was in a hospital emergency room.

Earlier, Ngo wrote that he had been specifically singled out by Antifa as a target.

“I am nervous about tomorrow’s Portland antifa rally,” Ngo wrote.” They’re promising “physical confrontation” & have singled me out to be assaulted. I went on Tucker Carlson last year to explain why I think they’re doing this: They’re seeking meaning through violence.”

I am nervous about tomorrow’s Portland antifa rally. They’re promising “physical confrontation” & have singled me out to be assaulted. I went on Tucker Carlson last year to explain why I think they’re doing this: They’re seeking meaning through violence. https://t.co/kpkESjsOmI pic.twitter.com/J45MMshyyK

Conservative blogger Michelle Malkin later provided an update on the extent of Ngo’s injuries on a GoFundMe campaign page set up to help him cover medical costs and stolen camera equipment.

“Attackers tore his ear lobe and you can see the injuries he sustained to his face and neck,” she wrote. “Please keep sending messages of encouragement with your much appreciated donations to keep his spirits up and let him know how much his journalism matters.”

She wrote that Ngo “was beaten and robbed today by Antifa while covering the latest paroxysms of left-wing violence. Andy has been singled out, doxxed, and targeted by SJW thugs while police stand by and do nothing.”

Malkin later wrote in an update that Ngo’s lawyer Harmeet Dhillon said that the injured reporter had been “admitted to the hospital overnight as a result of a brain bleed.”

She also noted that the $50,000 campaign funding goal had been exceeded. At the time of reporting, the campaign had gathered over $100,000.

“Nearly 2,000 of you have smashed through the goal in just 7 hours. THANK YOU ALL! Keep your prayers up for Andy’s healing and recovery. Word is just now spreading overnight about Andy’s attack, condition, and hospitalization. The city and police remain apathetic. Antifa remains on the attack.”

Some of the remarks in the comments section of the campaign include: “Andy Ngo is my hero,” and “Get well Andy! Hope these donations will allow you to stay safe while exposing these people for who they truly are,” and “I do not support the violent, racist and fascist ANTIFA.”

Competing demonstrations spilled into the streets of Portland on Saturday, with fights breaking out in places as marchers clashed, The Oregonian reported.

At least three groups had planned rallies or demonstrations at different sites in the city, including members of the right-wing men’s group, Proud Boys, and Antifa.

In a statement Saturday night, the Portland Police Bureau said three people were arrested on assault and harassment charges in connection with the protests.

Police also said medics treated eight people, including three police officers, at the scene. Three people were taken to hospitals after they were attacked, police said.

Protesters also clashed with police, throwing water bottles and eggs at officers. In separate social media posts later in the day, police declared the situation to be a civil disturbance and warned that participants faced arrest.

The Portland Police Bureau on Twitter asked for the public’s help in investigating violent assaults. The bureau also said that it has received reports that some of the milkshakes thrown by protesters contained quick-drying cement.

If you witnessed the violent assaults that occurred on SW Morrison between 5th and 6th Avenues, or have any video links, please send us the information. Email crimetips@portlandoregon.gov with information.

“Demonstration events are very fluid in nature and the management of these events is complex,” Assistant Chief Chris Davis said in a statement cited by The Oregonian. “There are hundreds of peaceful free speech events in the City in a given year that do not result in violence. Unfortunately, today some community members and officers were injured. We are actively investigating these incidents to hold those responsible accountable.”