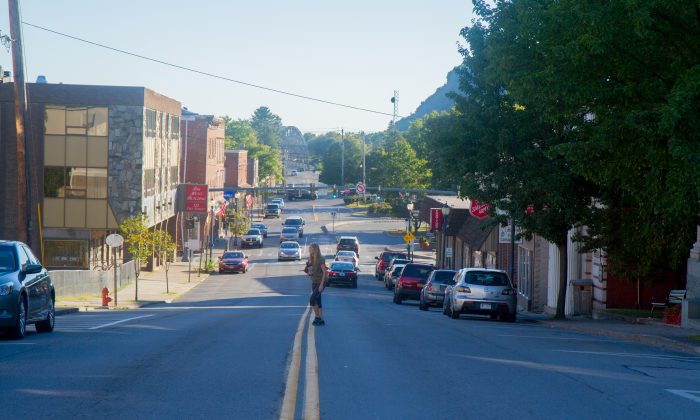 A view of Pike St. looking towards Front St. in Port Jervis on Sept. 12, 2016. The streets are part of a Complete Streets design the city is using a $20,000 grant to make improvements to. (Holly Kellum/Epoch Times)
New York

PORT JERVIS—City of Port Jervis residents came to City Hall Sept. 12 to talk to planners about a redesign of some downtown streets that the city is putting a state grant towards.

The grant, which is a $250,000 a year for 5 years split between Newburgh and Port Jervis, is called the Healthy Orange Schools and Communities grant, and was awarded to Orange County by the New York State Department of Health to reduce chronic disease.

For the initial phase, the city will be focusing on Pike St., Front St. and Jersey Ave., and this year’s grant money will go towards the planning for those streets.

The city is following the state’s Complete Streets initiative, which emphasizes street that take into account multiple modes of transport. “This includes pedestrians, bicyclists, public transportation riders, and motorists; it includes children, the elderly, and persons with disabilities,” the state’s Department of Transportation (DOT) website says.

Planners from ALTA Planning + Design based in Troy, New York met with about two dozen residents in two information sessions that day, and a handful of people in an evening workshop to solicit input on the Complete Streets design.

From those sessions, the suggestions they got were for more greenery in the city, wider sidewalks, bike lanes and racks, more trash bins, and sidewalks that are compliant with the Americans with Disabilities Act (ADA).

During the workshop, Fourth Ward Councilman Stanley Siegel broached the idea of a promenade in the downtown, an idea ALTA planner Daniel Berheide said was raised in earlier sessions as well.

Siegel also talked about a long-time dream to see the old O&W Railroad track that goes from Port Jervis to Kingston at least partially turned into a rail trail that would connect to the downtown.

“And then people could walk all the way from Sparrowbush to the D&H [Canal],” he said.

Sean Donnelly, a co-owner of 46-48 Front St., said that as a soon-to-be alcohol vendor, he would like to see a design that slowed traffic on Front St.

His partner, David Krantz, suggested creating a more welcoming entrance to the city for people coming off the train.

That parking lot should be a park with benches and bike racks.
— Stanley Siegel, Fourth Ward Councilman, City of Port Jervis

“That parking lot should be a park with benches and bike racks,” Siegel agreed.

Mayor Kelly Decker said he would like to see some sort of wired-in sound system in the downtown that can be used to play music or make announcements during events.

In that vein, First Ward Councilwoman Sarah Hendry suggested something like moveable bollards that could block off parts of the downtown during events.

The Healthy Orange Schools and Communities grant goes through the school district and targets areas where many children get free or reduced-price lunches, said Bob Deitrich, director of community health outreach for Orange County.

The Port Jervis Common Council passed a resolution in April of 2015 to adopt the Complete Streets Program.

The grant started in October last year, and the money Port Jervis is using for its Complete Streets design of Front St., Pike St., and Jersey Ave. was left over from last year. Complete Streets is likely to be an aspect of the grant going forward, Deitrich said, but did not give specifics.

The ALTA planners, which Ridgeway describes as “professional in creating healthy communities,” have until the end of September to finish their design.

Once the design is done, it is up the city to decide how it wants to implement it, if at all, and come up with the funding to do so.

Deitrich said the final design will be made public, most likely on the city’s website.