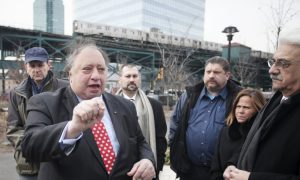 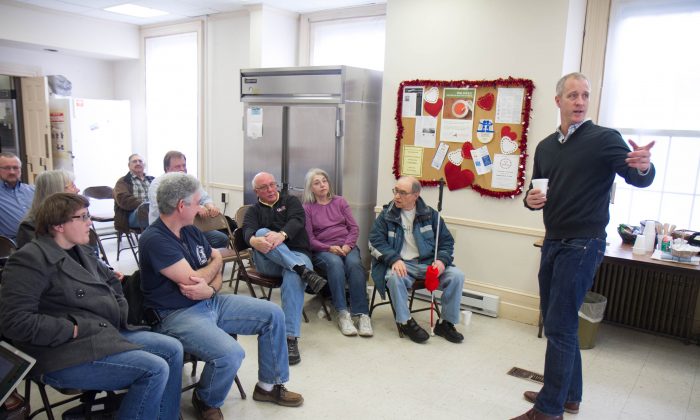 PORT JERVIS—A dozen of Rep. Sean Patrick Maloney’s constituents met with him on Feb. 20 in a meet and greet that turned into a discussion about housing and transportation.

Lorraine Marquez started the discussion by asking what the federal government could do about banks that walk away from foreclosed properties that the city then inherits.

“On my little street, already four out of eight houses are gone. Three of them are rental properties. We’re the last homeowners standing,” Marquez said. “It would help us out greatly, and plenty of other struggling towns, for the banks to face the music and do the right thing.”

Maloney said it’s a common complaint and one of the ways he’s addressing it is by writing a bill that would let people take out $25,000 from their IRA (they can take $10,000 out now) penalty-free to put toward a home.

This, he said, would enable more people to afford homes, which would enable those foreclosed homes to be bought by individuals instead of going to real estate money funds like they are now. He hopes this will also encourage young people to save in an IRA (Individual Retirement Account).

He addressed other barriers, like having to bring cash to the auction or paying for an inspection up front, and he said working with the federal agencies that write these rules would also help to lower some of the barriers that individuals face.

“They have good intentions, but what they’re doing is skewing it toward institutions and large pools of money that can deal with this crap,” he said.

Dan Buckley, a Port Jervis resident who recently stopped driving for medical reasons said he has been taking a train to Salisbury Mills then a taxi to get to a part-time job in Newburgh. He said there is no bus that would take him to Newburgh from the train station, and he cited similar situations where public transportation was lacking at train stations.

“If you’re going to develop Port Jervis as a possible bedroom community, you got to have a way to get people to some of the services and some of the good things that are around the county,” he said.

The discussion turned to Stewart International Airport and the lack of public transportation to it.

Maloney, who spends three days out of the week in Washington,  said he often flies out of White Plains or J.F.K. Airport because Stewart is more expensive and has less flights. He said having public transportation to Stewart would increase it’s attractiveness, and if more people use it, more flights would be added.

“You can fly all over the place from White Plains. It’s a worse facility than Stewart, worse runway, worse terminal, but there is more activity around it,” he said.

What is stopping expansion of the rail system into Orange County is lack of capacity in the tunnels between New Jersey and New York. New Jersey Gov. Chris Christie killed a plan to build the ARC (Access to the Region’s Core) tunnel under the Hudson River in 2010 so he could balance the state’s budget, a campaign promise of his.

The idea has not gone away however, and the new Gateway tunnel plan calls for almost double the budget of the ARC tunnel and a timeline that would bring it online in 2030 instead of 2017, as was estimated for the ARC tunnel.

“The value of the tunnel is that you can extend the New Jersey transit lines that you’re riding on into Orange County,” Maloney said. “When we do that, we can then have more regular train service and we can justify expansion of those lines.”

He said a spur to Stewart Airport would be part of that expansion since Metro North comes so close to the airport already. He pointed to the Woodbury Mall, West Point, and Legoland if it comes to Orange County, as international attractions that would all benefit from better rail service.

When asked about funding for bridge repairs in the city, he said he did not have the authority anymore to earmark funds for specific projects, but could allocate more money to be spent on projects like those.

“It took all the fun out of being in Congress, trust me,” he joked.