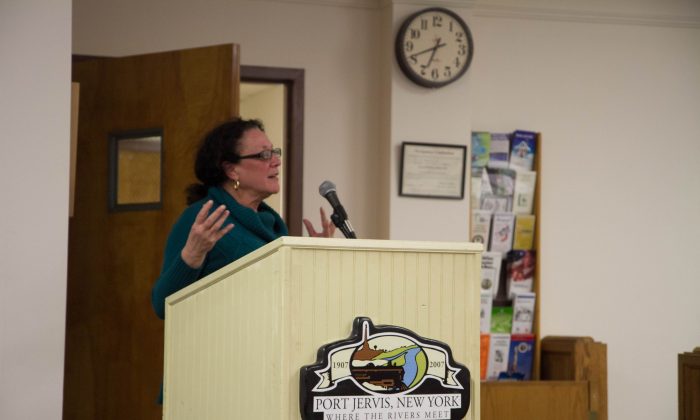 PORT JERVIS—Eight people spoke before a packed room in the Port Jervis Common Council chambers Feb. 25 in a brainstorm session about what to do with city-owned properties that the city hopes to see back on the tax roles under good ownership. They are dealing with a problem faced by cities throughout Orange County.

The city withheld 31 properties from the 2015 tax lien sale with the idea that it could refurbish and sell them to new owners.

The city council, with the advice of the assessor, chose the properties that they thought had the potential to be rehabilitated with the intent that the city could sell them for the amount it invested in them, with stipulations about how long the new owner had to live in the house and that it be the new owner’s sole residence.

William Onofry, a local lawyer and real estate investor, said he didn’t think the city should get into the business of flipping properties because there is no guarantee the city will get a return on its investment, and even questioned the legality of it.

“Even though you think that you have a law in place that allows the city to pick and choose what tax liens it wants, that law is untested, and in my opinion that law will be overturned,” he said, adding he thought the state comptroller would not allow the city to acquire a property that it has no use for.

Mayor Kelly Decker said later in an email that the city’s corporation council researched the decision to withhold the properties before the decision was made on Nov. 16, and noted that Onofry, a frequent buyer at these tax liens sales, would have been affected by this.

“Anyone can make any claim they want,” he said.

We thought a lot of things in this city couldn’t be saved and we are saving them.
— Debbie Raia

Onofry gave council members four pages of written questions he had about the current plan, and said he would be more in favor of a third party, like a Community Development Agency (CDA), or a land bank with a board of directors, managing a program like this instead of city council.

He also suggested the city be a bidder in the tax lien sale instead of withholding properties from it.

Jim Blanton, a home owner and landlord in the city, said he thought the city was moving in the right direction with its plan, but thought a public-private partnership would be better than the city doing it alone.

The value of having the city involved, he said, is that it could have some measure of control over who can buy the lien.

“If a property goes up for tax sale where anyone can bid on it, so often the ones that bid on them the highest are the ones we don’t want to get these properties,” he said.

He suggested the city could also get into selling and financing properties, and use the interest accrued through that to repair other properties.

How does the city ensure someone who wants to put down roots in the city get preference over someone with more money?

Debbie Raia, the owner of Twenty Seven Gallery and a Port Jervis resident, said she hoped a committee could be formed to determine which buildings should be torn down, which kept, and who they would be sold to. She pointed to several recent acquisitions of properties that the city had earmarked for demolition that found buyers willing to repair them.

“We thought a lot of things in this city couldn’t be saved and we are saving them,” she said. “We [the city] can’t be the only judge of that, there has to be an independent party.”

Spanish interpreter and Port Jervis resident, Rosalina Vega, asked how the city could ensure that someone like her, who wants to put down roots in the city, gets preference over a someone who may have more money, but no intent to live on the property or improve it.

Decker said one idea they were exploring is having a lottery system, but said that nothing had been decided.

Marie Cain, a homeowner and landlady in Port Jervis, suggested selling the properties as is “with some type of assist from the bank,” because after years of buying properties and fixing them up, she said the city would put more money into them than they could sell them for.

First ward councilman, Stanley Siegel, reiterated his idea to sell city-owned properties in a plan “that ended up being called the Dollar House [plan],” he said. The city would sell its properties for $1, but the new homeowner would have to obtain a certificate of occupancy that shows it is up to code within a certain amount of time, and live in the house for a determined amount of years.

“Very simple,” he said. “The only difficult part to this thing is, how do you determine who gets that house?”

He said the city would lose more money than with the mayor’s plan, but it would put the property immediately back on the tax roles.

The city currently only has about half a dozen houses in its possession that this program would apply to. Property owners have two years to pay off their tax bill and reclaim their properties, and most of them do, Decker said, so in two years it is unknown how many houses would be eligible for this program.

Decker said they would review the feedback and hold another workshop, which he said later in an email he hoped would be mid-April. In the meantime he asked people to email him with suggestions at portjervismayor@gmail.com.

Run down, vacant or abandoned properties is something that all Orange County cities are dealing with.

In 2014, Middletown started a similar program to what Port Jervis is considering by forming a CDA (Community Development Agency) that is comprised of all the members of the common council with the mayor as chair.

The CDA takes homes that have come to the city through tax foreclosures, rehabs them, then works with a non-profit called Pathstone to find qualified buyers.

The Middletown CDA rehabs foreclosed houses and works with the non-profit Pathstone to find qualified buyers.

Because the program is so young, they are just finishing their first house, but already Maria Bruni, director of the city’s Economic and Community Development and a member of the CDA, said it has given them the confidence to do more.

“It’s accomplishing the goals that we set so we feel pretty confident [that for] the next group of homes that go, we’ll be able to successfully rehab them and put a homeowner in there,” she said in a phone interview.

They have about 17 properties that are eligible for the program right now and they hope to do four or five of them this year.

As part of a multi-dimentionsal plan to tackle distressed properties, Newburgh has a Land Bank, which is made up of city agencies and local stakeholders. It acquires titles to distressed properties (some city-owned, some not), removes barriers to development, and puts them under new ownership.

The land bank is made up of at least one member of City Council, the city manager, a member of the city’s planning board, the chairperson of the Newburgh Property Remediation Task Force, and other members elected by the board of directors. It currently has 10 members.

The Newburgh Land Bank was incorporated in 2012 and finished its first house in May of 2013, the Land Bank’s Executive Director, Madeline Fletcher, said in an email.

Since that time they have done eight total properties and hope to do 20-30 more this year, she said.

I would recommend that any community with distressed properties investigate land banking, but as part of a comprehensive effort.
— Madeline Fletcher, executive director, Newburgh Land Bank

The land bank does minimal work to the properties before they are sold, “cleaning out buildings, structural stabilization, some environmental testing and remediation where needed,” Fletcher said.”But the primary goal is to pass properties on to purchasers to do the complete renovation.”

She said the land bank has so far done what it set out to do—restore blighted buidlings in the city and give them productive uses—but she says it’t not the only way.

The city started a Land Bank at the advice of a study done by the Land Use Law Center out of Pace School of Law, that recommended a three-pronged approach to the problem: streamline development processes,  improve code enforcement strategies, and form a Land Bank.

Fletcher said that working on all three simultaneously has been key.

“I would recommend that any community with distressed properties investigate land banking, but as part of a comprehensive effort to identify best practices for distressed property strategy,” Fletcher said. “Often, a land bank is one of several strategies that should be implemented in a place—just like in Newburgh.”