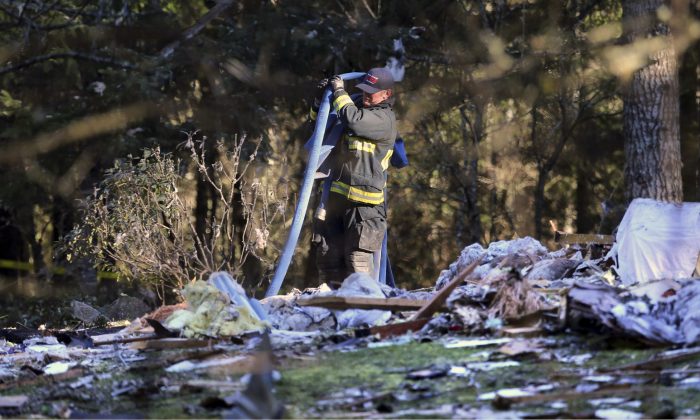 A South Kitsap Fire and Rescue firefighter collects a hose at the site of a home explosion in the 3800 block of Soholt Lane SE in Port Orchard, Wash. on Tuesday, Feb. 23, 2016. The remains of two people were found following a powerful explosion Tuesday morning that leveled a home in Western Washington. (Larry Steagall/Kitsap Sun via AP)
News

The home exploded in Port Orchard, about 15 miles west of Seattle. The Kitsap County Sheriff’s office said it has confirmed two fatalities at the blast. Identifications have not been released.

Previously authorities said two residents of the triple-wide manufactured home were unaccounted for. The sheriff’s office was still trying to determine the cause of the 4 a.m. explosion.

South Kitsap Fire and Rescue said the explosion shook the neighborhood, damaged other homes and blew out windows at a nearby elementary school.

School officials were assessing the damage at Mullenix Ridge Elementary.

Sheriff detectives have requested the federal Bureau of Alcohol Tobacco and Firearms assist with the investigation.