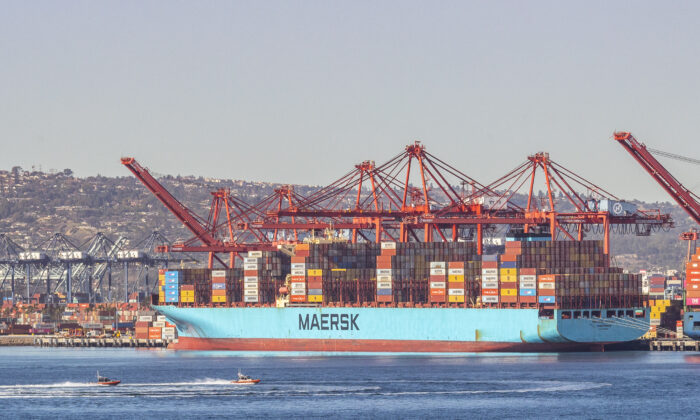 The Port of Los Angeles is watching events closely in China as container ships stack up outside Chinese ports affected by new COVID-19 outbreaks and manufacturing shutdowns.

After a year of cargo bottlenecks at the port, Executive Director Gene Seroka laid out his “wait and watch” strategy for what many industry experts say could upend the progress made on easing the supply chain.

“There are a few unknowns here,” Seroka said during a March 16 press conference when asked about factory shutdowns in Shenzhen and other cities. “We’ll continue to watch this.”

Shenzhen is the hub of electronics manufacturing in China, home to Tencent and Huawei Technologies.

The port’s officials will continue talking with friends and colleagues overseas and try to keep up with some other observations around factory strength so they can have a better look at the situation, Seroka said.

“You can’t jump at shadows,” Seroka said. “You can’t run around with your hair on fire. We’re going to look at everything for what it’s worth, based on data and the facts. We’re going to continue to be as resilient as possible.”

Before factoring in more shipping backups, retail experts were predicting imports at the nation’s container ports to be at near-record levels this spring and summer.

Consumer demand and supply chain challenges continue to cause congestion, according to the monthly Global Port Tracker report released March 8 by the National Retail Federation (NRF) and Hackett Associates.

“Consumers are still spending and the supply chain is still working to keep up,” NRF Vice President for Supply Chain and Customs Policy Jonathan Gold said in a statement. “Growth rates have slowed down from the off-the-charts numbers we saw last year, but volume is close to the highest we’ve ever seen.”

Congestion at the ports continues to plague ports on both coasts, according to the report. However, Seroka said congestion did not exist at the Port of LA.

“The port terminals are not congested,” Seroka said.

Instead, Seroka said unused trucking gates and regional labor shortages were to blame for delays. More than half of the truck gates at the terminals are not used, he said.

“That means, we could double the productivity on trucks and double the amount of cargo that moves in and out purely by the numbers of truck gates,” Seroka said.

Port officials in Los Angeles said more than 65 percent of cargo stored at the docks for more than nine days has been cleared, but nearly 13,500 of the long-term containers still remained. Nearly 37,000 containers were on hand at the port, waiting up to four days for delivery.

The Port of Los Angeles does expect labor negotiations to continue past the June 30 deadline but that should not be a concern, Seroka said.

“We’ll keep a close tab on this,” Seroka said.

Problems remain with clearing import containers on the port terminals, according to a statement by Hackett Associates Founder Ben Hackett.

“Until supply chain problems are sorted out with more drivers, trucks and inland storage space, we do not expect to see a rapid decline in the backlogs being experienced,” Hackett said.

The Port of LA reported record imports again in February while exports continued to decline. The port received more than 424,000 containers, an increase of nearly 3 percent from last year. Loaded export reached more than 95,000, a nearly 6 percent decline.

About 44 cargo ships were headed across the Pacific Ocean to the Los Angeles-area ports, which is down from a record 109 in January.