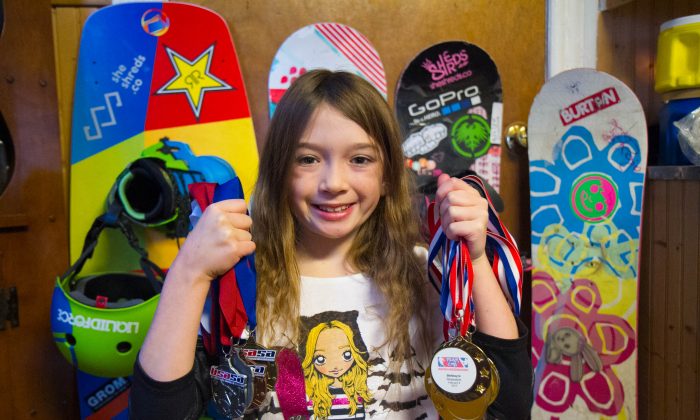 Ashlyn Overland, 9, stands in front of her boards holding her snowboarding medals at her home in Port Jervis on Jan. 19, 2016. (Holly Kellum/Epoch Times)
New York

PORT JERVIS—This is only Ashlyn Overland’s second season doing competitive snowboarding, but she has already been invited to nationals once and she’s on target to do it again this year, her mom said.

“She picked it up very quickly and it just went from there,” her mother, Dawn King said.

Overland, a third grader at Anna S. Kuhl Elementary, has been snowboarding since she was six years old. Her parents thought they had packed away their snowboards for good after Overland’s older brother, Dustin, didn’t take an interest in the sport, but that all changed after Ashlyn came along.

Now she lives, breathes, and sleeps snowboarding. Starting around Thanksgiving, Overland has been traveling three hours one way to Vermont for the weekend where she trains with the Mount Snow competition team. Since January she has been competing with them in different disciplines like boardercross, giant slalom, halfpipe, and slopestyle around Vermont.

During the week, she practices at Mountain Creek in Vernon, New Jersey, and when she has some spare time at home, she is on her balance board or Ripstik, strengthening her core and improving her balance.

Last summer she took up wakeboarding, which is similar to snowboarding but on water, and next year she plans to do that competitively as well.

She has had to make sacrifices for her love of snowboarding though. She used to dance, do cheerleading, and play softball, but now she mostly focuses on snowboarding, with her other sport being gymnastics.

All that hard work is in pursuit of higher goals. Not only does she want to do snowboarding professionally, but she hopes one day to compete in the X Games and the Olympics.

She hopes one day to compete in the X Games and the Olympics.

Right now she is concentrating on nationals and earning enough points to be invited again this year. Last year she was part of the Catskill Mountain series, which was not as competitive as Vermont and she won all gold medals. This year they decided to go to Vermont because it offered more disciplines, but the competition is harder and the pool of girls is bigger. So far she has won one gold, two silver, and one bronze medal.

Her season goes from January to March with 22 events in all. How well she does in each event is translated into points, and if she gets enough points, she will be invited to nationals in April at Copper Mountain in Colorado.

When she was invited last year, they weren’t prepared to go, King explained. This year, they are looking into sponsors and other funding in anticipation of her being invited again.

Overland is already an ambassador for SheShreds.co, a company that sells active wear and gear for females and promotes extreme sports for women and girls. As an ambassador, if someone buys apparel from SheShreds.co with the code Ashlyn, she gets a commission.

When asked what she likes about competing, it’s not what you would expect from someone hoping to snowboard professionally.

“To make new friends and [meet] new people,” she said.

She also likes to go fast, which is why boardercross, a race between 4-6 snowboarders down a narrow course with challenging features, is her favorite.

King said she gets nervous seeing her daughter flying over jumps and doing tricks on a snowboard, but Overland says she’s not afraid, even after several non-injurious accidents.