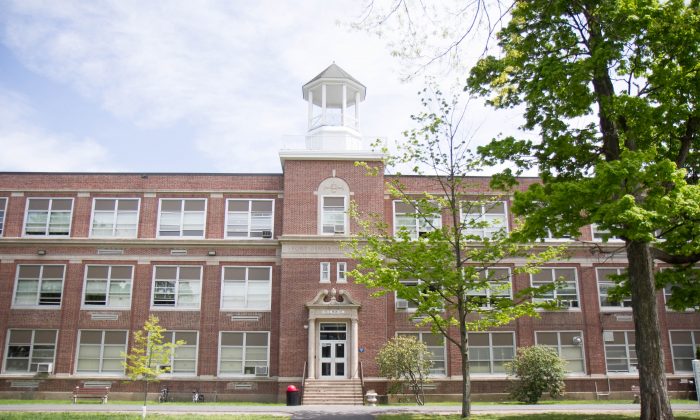 The front of the Port Jervis Middle School in Port Jervis on May 11, 2016. (Holly Kellum/Epoch Times)
New York

PORT JERVIS—The Port Jervis City School District is looking for people to serve on a building committee that would offer recommendations on the fate of the Middle School.

The 118 East Main Street building was built in 1922 as a high school and changed to a middle school in the 1960’s, said District Superintendent Thomas Bonjiovi. Since it was built, it has never been expanded, he said.

You have to come to the meetings to find out.
— Thomas Bonjiovi, District School Superintendent

A copy of the presentation he gave the Board of Education on May 3 says some of the problems are that classrooms did not meet State Education Department requirements, there was limited space for computer labs, no emergency power, and the building required masonry work, among other repairs.

They explored other property options as well, such as building a new middle school or high school on property the District owns on Route 209 in Deerpark across from the Tri-States Christian Camp. They ruled this option out because the purchase of additional land to build was too expensive.

They also ruled out building a new elementary school near Hamilton Bicentennial Elementary (HBE) because there was not enough land.

The 209 complex that currently houses the high school and Anna S. Kuhl Elementary School could have additions added onto it, the report said.

The Future Building Project Committee would explore all options, Bonjiovi said, not just those put forth by Highland Associates.

“I don’t want to discuss too much detail because you have to come to the meetings to find out,” Bonjiovi said in a phone interview when asked about what the committee’s responsibilities would be.

Whatever happens to the middle school, said Gary W. Lapriore, a former mayor of Port Jervis and a former student there, he wanted to know how much it was going to cost taxpayers. He understood the need for a new building, he said, citing crowded hallways.

“The building has certainly outlived its usefulness,” he said in a phone interview.

Former City Historian, Brian Lewis said the school was built on the property of Colonel Fowler, a businessman who lived in Port Jervis in the 1850’s. The mansion that was part of his estate sat where the middle school is currently. He had a “financial embarrassment,” Lewis said, and was not able to keep the estate, and it was eventually acquired by the District.

The Sullivan Avenue Elementary School was built just down the road from and shortly before the middle school in 1918 or 1919, Lewis said.

The district owned that building for many years but sold it to Easter Seals for $1 in 2008 with the idea that they would refurbish it and use it. The economic recession hit and Easter Seals did not have the money to do as they planned, so in February the District took it back.

After doing a cost analysis, the Board decided the best option would be to demolish the [Sullivan Ave.] building.

After doing a cost analysis, the Board decided the best option would be to demolish the building because of the work it would require to fix it up after sitting vacant for over 10 years.

The tentative assessed market value of the land and building, according to county tax records, is $193,200. The District would pay $353,000 from its fund balance to demolish the building.  On May 17, district residents voted 516 to 376 to demolish it as one of the referendums on the District’s budget vote.

“I hate to see that happen,” Lewis said in a phone interview. “Maybe they can revert them to apartments or something.”

While the fate of the Sullivan Avenue building has been decided, the Future Building Project Committee will research  options for the middle school and present their findings to the Board at some unspecified date, Bonjiovi said.

They are looking for a “good representation” within the community, and by May 11 they had about 20 people who had expressed interest, Bonjiovi said.

The first meeting is June 9 and the deadline to sign up is June 3.

Note: This article was updated on May 18 to reflect the results of the 2016-2017 District budget vote.