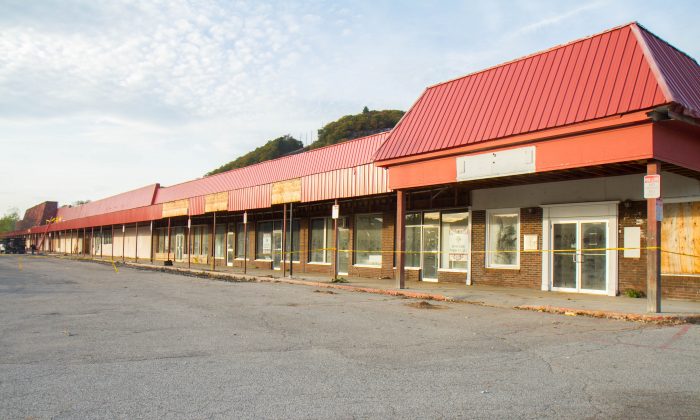 PORT JERVIS—Anticipation has been building since Ellicott Development Co. started renovations on the strip mall in Pike Plaza last year, and so has disappointment as the project has gone unfinished.

Residents saw big improvements to the outside of the building over the summer, but since late fall there has not been much noticeable progress.

There were several unforeseen problems that caused the delay, explained project manager Tim O’Brien at an Industrial Development Agency meeting on Jan. 13. Some 55,000 square feet of decking had to be replaced on the roof, which was so holey, “it was like a kaleidoscope in there,” he said.

The city asked for a new color scheme to replace the Erie Lackawanna colors they were going to use, which was the other major delay, Mayor Kelly Decker said.

That along with asbestos abatement that had to be done, rotten wood in the front canopy, and several thefts of copper piping were just some of the problems that set the project back both time-wise and financially. The asbestos and decking alone cost almost half a million dollars.

“We would have liked to spend that [money] elsewhere on the project,” O’Brien said. “With that said, we are still financially in a good position.”

They have been doing interior work since the weather turned cold, and O’Brien said they would be finishing the exterior work this spring.

Once the building work is done, they also plan to repave the parking lot.

Ellicott is optimistic it can find tenants for the building, and it helps that Burger King and Rite Aid have established themselves in the plaza, O’Brien said. Just this summer, Rite Aid won an award for the best-performing store in the the region.

Ellicott is in talks with two grocery stores, one national and one more regional, as well as two retail stores, a bank, a pizzeria, and a Laundromat.

O’Brien estimated they had 8 or 9 business that were serious about signing leases, and said they hoped to have finalized contracts within 2-3 months, with tenants moving in by summer.

“Things are moving forward,” he said.

With ShopRite a stone’s throw away in Montague, Save-A-Lot and the Herb Shoppe on Jersey Avenue, Price Chopper in Matamoras and several other deli-grocers in the city, second ward councilman Robert Ritchie said he has doubts about whether the city can support another grocery store.

“My question is, if they did [put in] another grocery store, would that knock out Save-A-Lot?” he said.

After Kmart left the plaza, Great American was there for a long time and he thinks they are defaulting to a grocery store because that is what people are used to there.

“They’re not thinking outside of the box as far as I’m concerned,” he said.

His idea is to reach out to types of businesses the city doesn’t have, like L.L. Bean or REI, and invite them to do a feasibility study on the market, thinking ahead to when the Port Jervis’ is an outdoor recreation hub. Already the city is clearing trails in its watershed area and for many years has been working on getting a whitewater park in the Delaware River.

“We’re looking to draw people from not just Port Jervis to use these facilities, we’re looking for people from Jersey, Albany, Boston, New York … those people are going to look for those kinds of stores,” Ritchie said.

Fourth ward councilman, Stanley Siegel, also expressed concern about another grocery store in the city, especially with one being built in Dingmans Ferry, which could draw shoppers from Milford away from Port Jervis. “I don’t think it [the city] could support another supermarket. It may be able to support a current supermarket,” he said, adding he knew of one that was interested in expanding. “It’s a limited market.”

The mayor sees things a little differently. He is more concerned about people shopping locally and keeping that money in the city. He pointed to his childhood when there were three major grocery stores in the city as evidence it is possible.

“If a grocery store has intentions to come here, I’m willing to embrace it,” he said. “Especially if they offer a product different than that of Save-A-Lot.”

One thing the Industrial Development Agency seemed to agree on was the desire for better communication with Ellicott and updates on the progress of the plaza. O’Brien agreed to talk to Ellicott CEO William Paladino about putting out press releases or coming to a city council meeting every few months to keep the public informed.