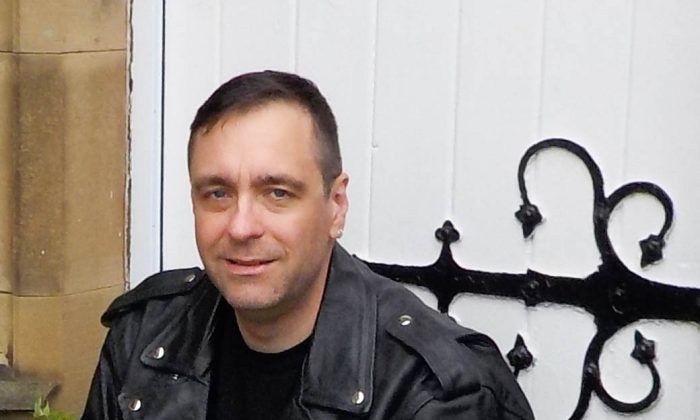 Q & A with Police Sergeant Michael Worden
By Holly Kellum

Epoch Times: What made you interested in the paranormal?

Michael Worden: It was a natural curiosity and also driven by the experiences I was having as a child in a family home that was having unexplained paranormal activity going on.

Epoch Times: What do you hope will come of all your investigations?

Mr. Worden: Partly to satisfy my curiosity but also to contribute towards answering the question: ‘Are hauntings or paranormal activity something that we can provide credible evidence of, to show that there is something going on?’ This isn’t something that people are imagining or misinterpreting. There are legitimate cases where there is paranormal activity that can’t be explained in our current base of knowledge or science.

Epoch Times: Do you feel there is enough evidence out there to prove the existence of the paranormal?

Mr. Worden: I think there is a lot of evidence that goes back thousands of years. People have been reporting various ghostly phenomena. There’s a lot of anecdotal evidence and there’s a lot of personal experience over the centuries that people have reported. There are a lot of good investigators out there trying to draw a correlation between haunting activity and some way of scientifically measuring it or measuring the effect of those activities.

Epoch Times: Do you think more people are recognizing paranormal phenomena as paranormal as it becomes more socially acceptable to believe in it?

Epoch Times: Is there one paranormal investigation that is the most memorable?

Mr. Worden: My grandparent’s home in Port Jervis really started a lot of my curiosity. In an investigation, my partner Linda Zimmermann and I both had a very powerful emotional reaction where we are both very upset. We were experiencing what I would describe as intense sadness and grief simultaneously in a dark room. I described it as the grief that could only come from a parent losing a child, and I felt that whatever I was feeling was a life-altering sadness.

We were experiencing what I would describe as intense sadness and grief simultaneously in a dark room.
— Michael Worden, Paranormal Investigator
A year later, at an investigation of my grandparents’ house, the previous owner was a very prominent citizen—Judge Howell, a county court judge in widows and orphans court. He had been a Village of Port Jervis president, a very well-regarded member of the community. He died in the early 1900’s and his obituary mentioned that he had been predeceased by his only son, Bradford, who had died at an early age and the father had never really recovered from the blow.

This was like ‘wow’—it’s one of those moments that’s like a life-altering sadness. His son Bradford died at the age of seven and died 17 years before his father died. It was important enough to mention in his obituary that he never fully recovered.

We found a picture of the judge and people who have seen the apparition at my grandparents’ house said, ‘That’s the guy we’ve seen.’ He was a very distinguished-looking gentleman, with a big mustache. I’d like to think we actually helped that person move on because I think maybe the judge was stuck there in his grief. A very sad story but hopefully it has a happy ending.

Epoch Times: You said before that people vary in their sensitivity to ghosts and that you are on the more sensitive side. What does it feel like to sense a spirit?

Mr. Worden: It’s almost stereotypical that you feel like someone is behind you or you feel almost like someone’s standing up against you. Sometimes I get what I call the ‘cobweb feeling’ where you’re in a basement full of cobwebs and they’re all over your skin. Some of the spirits can communicate with you on a much more personal level where you can pick up on their feelings, and their thoughts. I’m not a psychic. I can’t literally communicate with them. With the judge, his grief was being communicated to us—his grief, his intense loss, and his sadness, that’s what we were feeling.

Some of the spirits can communicate with you on a much more personal level where you can pick up on their feelings.
— Michael Worden, Paranormal Investogator
Epoch Times: You mentioned experiencing the sadness of a young child spirit at Iron Island.

Mr. Worden: That’s probably one of the saddest and most personal. In this case, it was the spirit of a little boy that was reported at a former funeral home. Linda says, ‘You know, it looks like there is something in the corner. It looks like a child.’ So thinking more like a father I get him to come close. To have that experience of this cold hand touching you, and this [Electromagnetic Frequency Meter] EMF meter reacting, and this sadness like this poor lost child—as a paranormal experience, it was phenomenal, but as a father, it was heartbreaking. All I kept thinking about is my own kids, just picturing them like that.

Sometimes we get confirmation after the fact; it’s information we don’t know ahead of time. In that case of the little boy, on the ride home I felt that this kid, who was probably around my own kids’ ages which was around the age of six, he had died, not in the building. I said I felt his funeral was in the building. I didn’t think that he was murdered. I didn’t think he was buried under the steps somewhere. I felt that it was an accident. That was my impression just thinking what this poor little kid was maybe trying to communicate.

A year later when we went back up to Iron Island, the owners pulled us aside. They had a pretty well-known psychic, nationally known, who had come in. The first thing he told them was ‘You have a little boy in this place and his name is Richard.’ He said Richard lived on this street that the museum is on. It used to be a funeral home. He said his funeral was in this building. He also died on this street. He died in his home being drowned in his bathtub. That’s what he was telling me. That’s really great information. But it doesn’t mean anything unless you can verify that. I think he said the kid was six years old. The funeral home records were all tucked away in the basement. The owners went through and actually found funeral records for a little boy named Richard who drowned in his bathtub at the age of six two blocks away on the same street from the funeral home and his funeral was in the building.

For a psychic to guess one thing is good. When you start saying everything from the name, age, how he died, that’s just really weird. So I wonder if that was that little boy. I’ve always wanted to go back and have never gotten back that way to do an investigation.

Epoch Times: You talk about spirits who have taken over a place, not in a demonic possession way, but with their energy.

Mr. Worden: Hauntings are an attempt for them to communicate, to try to be noticed. I liken it to a little kid who is trying to get a parent’s attention in the grocery store. They start small, like trying to pull on a pant leg, and keep escalating it because mom and dad are not paying attention. That’s what I think spirits are trying to do. When you acknowledge [the haunting], it feeds whatever is in there and it’s not healthy.

Epoch Times: You spoke about during an investigation being shoved. You give the disclaimer that you will never say these investigations are safe. Have you ever been in a situation where you were actually scared for your life?

Mr. Worden: I don’t know if I’ve been afraid for my life, but I’ve been in situations that made me uncomfortable to the point where I had to leave. I’ve been shoved, I’ve been tapped, I’ve been pushed. At the Ulster County Jail I felt like I was being strangled in a cell where an inmate hanged himself.

I never tell people it’s safe because I don’t know that it’s safe. If there’s a very negative entity or ghost—if that entity can touch you—you have to be careful.

Epoch Times: I saw in your book that your kids like to join you. Is that true?

Mr. Worden: Yes. When they were really little I would take them to the cemetery. I had these meters that were very sensitive to movement. They would run around the cemetery. As they ran it would beep and make noises, and they were finding ghosts everywhere. They were also very sensitive as young children. I remember one time they stopped walking and pointed to a stone on the ground. They said, ‘There’s a bunch of kids here Dad. They are sad.’ As I’m looking at it, the stone toppled over. I pushed it over and there were three children’s names on the stone.

Mr. Worden: We have a few that we are looking to do, probably in November.

The answers were edited for brevity and clarity.