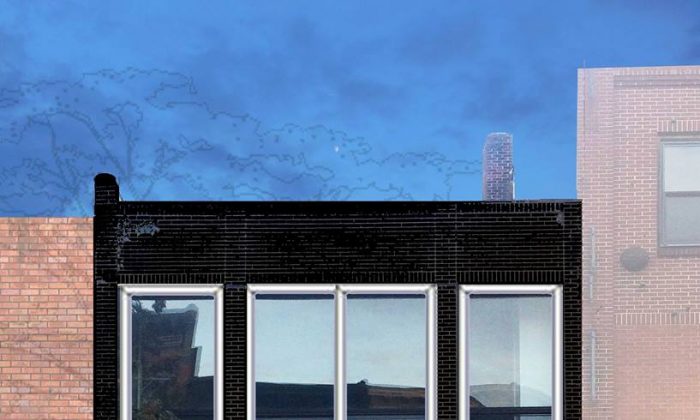 A design of the front of 42 Front Street in Port Jervis, the building for a new business, Foundry 42, a furniture workshop and retail store with an event space. (Arbuckle Industries)
New York

Port Jervis’ Front Street to Get Another New Business: Foundry 42

Building will have workshop, furniture store, and performance space
By Holly Kellum
Print

PORT JERVIS—If Cooper Boone had not waited five more minutes for his tardy real estate agent, the landscape of Port Jervis’ Front Street might have been a little different.

Boone had been waiting an hour for a real estate agent to show him 42 Front Street, the former Tri-State Fitness building. He was about to leave, thinking he would buy another Front Street building, when a friend who was with him at the time convinced him to wait another five minutes.

The building, built in 1940, has two floors and a finished basement. All the floors have tin ceilings, sturdy concrete walls, and on the top floor, large windows in the front and the back.

Now the first floor, which before had only a glass door and no windows, is awash with light.

Boone and his construction crew have been hard at work since he and his partner closed on the building in September, fixing and painting the tin ceilings, tearing down what was there before, putting in new air ducts throughout the building and “a lot of bone work,” as Boone calls it.

On Jan. 31 they made the most noticeable change to the building. What used to be a brown wooden façade that wrapped around the door like a timber wave has become a wall of glass.

Now the first floor, which before had only a glass door and no windows, is awash with light.

Boone, who has an eclectic array of artistic pursuits, plans to make a furniture workshop in the basement where he and his business partner, Victor Salib, will produce their Foundry 42 furniture line.

Ironically, the building was once a furniture store, said former city historian Brian Lewis. “Leven’s furniture store was in there for a while,” he said. “I have a picture and … it moved to that building in ’46.”

Already there is a collection of yard sale finds that are waiting to be transformed into upcycled furnishings: several antique suitcases will become cocktail tables, an old cheerleading megaphone and a baritone will be light fixtures, and a box made of wooden dowels will be strung with lights to become an Edison chandelier.

“So really taking in things and reimagining them,” said Boone, insisting he is more of a “meddler” than a carpenter.

“One of my specialties is to take things that people don’t think about in a certain way and turning it into something else.”

One of my specialties is to take things that people don’t think about in a certain way and turning it into something else.
— Cooper Boone, Owner, Foundry 42

That ‘something else’ he plans to display on the first floor, which will be all retail. Along with the furnishings, he plans to have his own handmade candles, a project he plans to make there to give people a taste of the beehive of activity below.

“I want to bring back and share and see people get excited about seeing someone working on a project in a store,” Boone said. “And it also solidifies the fact that we also do this here … it’s not made in China.”

It’s not made in China.
— Cooper Boone, Owner, Foundry 42

He sees it as a mini version of a makerspace, a DIY movement whereby artisans and other creators take a space and dedicate it to a creative pursuit. He said he was inspired by old factories in Nashville that have been converted into makerspaces where artisans of all kinds work together.

That is also part of what inspired the name, Foundry 42. A foundry is a workshop or factory for casting metal, which Boone felt represented the metal work they do with the furniture as well as the industrial vibe of the building. Salib is a metalsmith and will be doing the metal work for their furniture in the workshop.

“Our brand is about embracing old-school craft,” Boone said. “And I wanted something generic enough that it wouldn’t be tied into home goods or something.”

That is because the top floor, which will be the last phase of the building to open, will be an event space, where everything from small concerts to bridal showers to cooking classes or kids theater can be held.

“I really want it to be a community-type space where people are able to come and do different things,” Boone said.

One wall will be left unpainted and serve as a display for artists to showcase their work.

Already there is a wooden foundation of a stage, and Boone, a country singer who also plays ukulele and piano,  has some bands interested in coming up from Nashville to play. “Noted number one hit song writers,” he added.

Because it will take some time to curate the events, he is aiming to have the retail part of the building open in June and the event space open in August.

Boone is originally from a German Catholic town in Minnesota called St. Joseph. He moved to New York City in the mid ’90’s where he opened a clinical psychology practice, and even though the practice was fairly successful, “I was just not happy,” he said. “I just didn’t function well in the city.” He heard about the Port Jervis area at a dinner party and decided to go check it out.  “I was driving through Port Jervis and I was like ‘Oh, this is it,’ ” he recalled.

He liked the architecture of buildings, the proximity to the river, the convenience of having a train in the downtown and being right off interstate 84, as well as the diversity of the city.

“It’s got this kind of beautiful, quirky mix of people, which tends to be more me,” Boone said. “I’m not like the Hamptons guy.”

He bought land in Shohola, Pennsylvania, where he still lives, and he and his partner, Mark Veeder took up several revitalization projects in Barryville, a hamlet in Sullivan county on Route 97, about 20 miles northwest of Port Jervis.

I was raised with a strong belief in community stewardship.
— Cooper Boone, Owner, Foundry 42

They bought an old boarding house and turned it into bed and breakfast, an antiques store, and rental apartments and called it the Spring House. Later, they bought an ailing general store, redid the building, and reopened it with a wider variety of goods, but with a commitment to keeping it the local store it always was.

Later they founded the area’s first chamber of commerce, which Veeder was the president of, and Barryville’s first farmers market, which they still run.

“I was raised with a strong belief in community stewardship,” Boone said.

And just as much as Boone has thrown himself into ameliorating Port Jervis, the city has embraced him with arms wide open.

People have been so supportive in this community.
— Cooper Boone, Owner, Foundry 42

“People have been so supportive in this community,” Boone said. “I had someone show up last week and give me baked goods.”

He knows it is a show of appreciation for putting in the time and energy to improve the city’s downtown, and he’s excited to be a part of it.

He has gotten to know some other owners who have recently purchased Front Street buildings with plans to open new businesses, and like them, he sees the value of the area and his business increasing with each revitalized storefront. In the last five months, two other buildings on Front Street have sold, and a third is in the process of being sold.

“I call it the ‘reJervination,” Boone said. “We’re all very stoked.”

I call it the ‘reJervination. We’re all very stoked.
— Cooper Boone, Owner, Foundry 42

Already his furniture is practically selling itself. Without any marketing or even a website, he has 15 orders for Foundry 42 furniture waiting for him.

The business has been a large personal investment though, with only a low interest loan from the city for the facade, but Boone sees it as an investment in the future, and one that is well worth it.