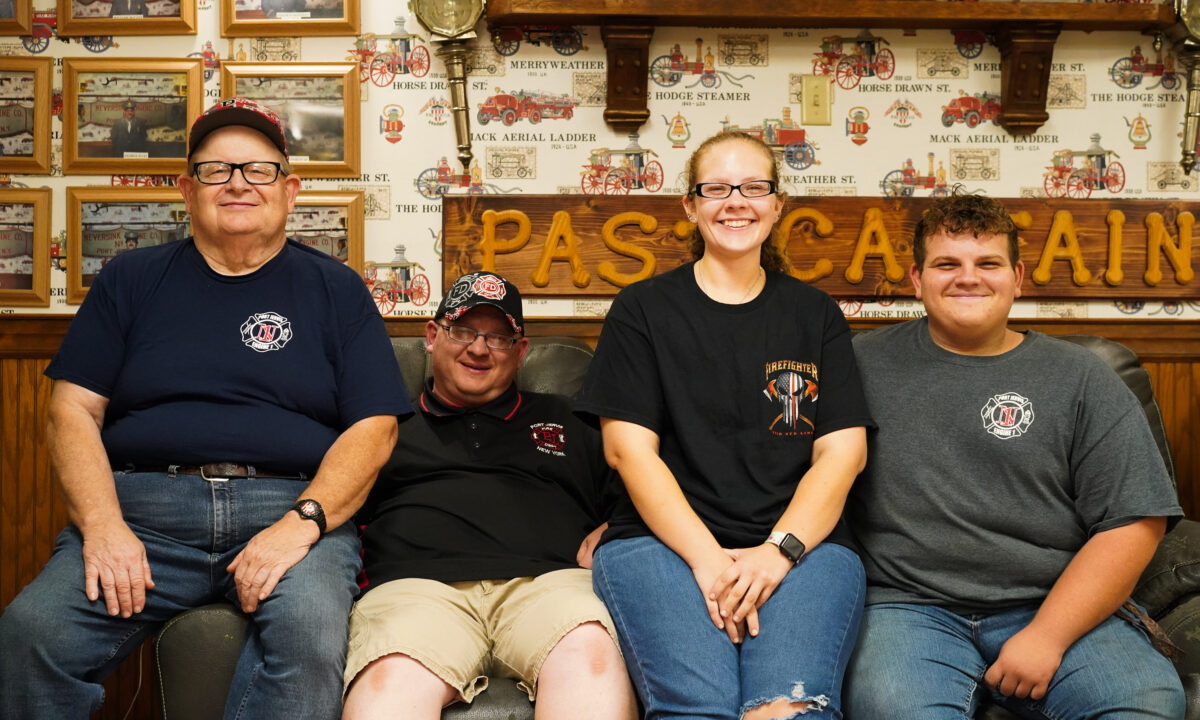 Moore Jr. had followed in his grandfather and father’s footsteps to become a volunteer firefighter at 16. His then-14-year-old teenage son, David Moore, was well on track to follow in Moore Jr.’s footsteps in due time.

But as to his daughter, Moore Jr. just never thought a girl would want to take on the dirty, heavy job that could cost her life yet doesn’t pay a dime.

It’s also a harder time to be a volunteer firefighter in New York than ever. Training hours have almost doubled since Moore Jr. joined, and one would be lucky to find an employer that is open to your leaving post for fire calls.

The two are the rare young volunteer firefighters at Neversink Engine Company, one of five engine companies in Port Jervis, a small city on the eastern bank of the Delaware River in New York.

The city relies on an all-volunteer firefighter system, which struggles to draw in new blood to sustain its lifeline, according to the Moore family.

Moore Jr.’s father, 70-year-old David Moore Sr., is the chief engine driver and the most productive member at Neversink Engine.

He and another retiree take care of fire calls during the day when younger volunteers work; after five o’clock in the afternoon, they alternate.

This year, up until the end of August, Moore Sr. responded to 107 calls, the highest among 15 or so active volunteers at the company.

His son, Moore Jr., the captain of Neversink Engine, came second at 93 calls. His grandson, 18-year-old David Moore, is ranked third at 82 calls. His granddaughter, 20-year-old Briana Moore, responded to the sixth most calls, at 52.

Both Moore Jr. and Briana Moore have full-time jobs at a glass manufacturer and a Wendy’s store, respectively. David Moore just graduated from high school; he plans to become a crane operator.

As volunteers, you can pick calls to go, but not the Moore family.

His wife, a daughter of a volunteer firefighter, has been very supportive of him, he said.

When Brian Moore was 17, she had her gallbladder removed and was resting at home. A fire call came through her pager during the middle of the day, and not enough volunteers could go. She got up and went.

“The best part of firefighting is saving a life,” Briana Moore said.

Now, Briana Moore is a manager at a Wendy’s store so she has more discretion in answering fire calls—especially major ones. When she was a line worker, her boss wasn’t that open to her leaving work for calls.

Once volunteers go on fire calls, they are considered city employees and covered under city insurance. However, when they make mistakes on calls, they can also be punished—a 30-day suspension that goes on your record or a demotion if you have a paid job with the city, Moore Jr. said.

Moore Jr. often says he is lucky that he could learn both from his father, who knows tricks to draft water from all kinds of sources, and from his children, who know the new techniques.

He worries about the day his father can no longer drive a fire truck.

“If we don’t get more volunteers to keep it running, we will have to end up being a paid department. Taxes will go up, and you are going to have paid firefighters who sit at a firehouse all day long and run the calls,” Moore Jr. told The Epoch Times.

In April, Briana and David Moore both became interior firefighters after they finished the mandatory 120-hour courses. They had to travel to the training center in Goshen, the county seat, for those classes, which ran for about two hours on weekday nights and eight hours over the weekend.

Briana Moore sometimes had to hit the road right after a 12-hour work shift to catch the evening classes.

The courses are broken down into two 60-hour parts, one being the exterior firefighting operation and the other being the interior part, where you learn how to get inside a structure, such as a house, to fight a fire.

“In this day and age, many people have two jobs. They don’t have time to go to classes to be a volunteer. We had young people come in and ready to join until they found out all the training requirements,” Moore Sr. said.

Later on, Briana and David Moore will have to take additional classes to be able to drive and pump a fire truck.

The increased training is intended to bring volunteer firefighters to the same level as the professional firefighters in an age when firefighting is more complex than ever, Moore Sr. said.

“In my day, the houses were just woods. Today, the woods have all kinds of chemicals in them. You also have plastics and other materials in the house structure. You just cannot do what I did; you’ve got to have the training,” he said.

In a recent training course, Briana Moore learned how to put out a fire from electric cars such as a Tesla. “In a way, the training is good, but it was also horrible because this keeps people away from becoming volunteers,” she said.

One way out is to finish the courses before having a full-time job or a family, Moore Sr. said. His grandson David Moore did just that.

“I blame it on this,” he said, holding up his cell phone. “They’d rather be on the video games and on their phones instead of trying to go learn something or be trained or hang out at a firehouse.”

Or they just don’t find it fashionable to do it for free, Briana Moore said. “They don’t want to risk their lives for someone they don’t even know or care about. They ask, ‘What is in it for me?’”

The Moore family did successfully recruit a young man outside the family into volunteer firefighting.

He is David Moore’s friend, Dakota Werlitz, who spent a summer with the family years ago, watching Moore Jr. run out of the house to answer fire calls. When Dakota turned 16, he submitted his application to become a junior firefighter.

Briana Moore is running to become the 2nd lieutenant at Neversink Engine. In that role, she will take on more responsibilities, such as equipment inspection and tracking calls.

The Neversink Engine expects to have a new fire truck next spring, which will be equipped with new tools to rescue people from damaged cars. Moore Jr., who oversees training at the firehouse, plans on a new training session for how to use the tools.

Moore Sr., who turns 71 in December, plans to drive the new truck for as long as he can.

The Moore family, like many other generational volunteer firefighting families in the region, are trying hard to find or cultivate people with that same mindset.

“I do [it] free now, and I can do [it] getting paid, but it is going to hurt the city majorly,” Briana Moore said.

Cara Ding
Follow
Cara is an Orange County, New York-based Epoch Times reporter. She can be reached at cara.ding@epochtimes.com
SHARE
Friends Read FreeCopyFacebookTweet
You May Also Like