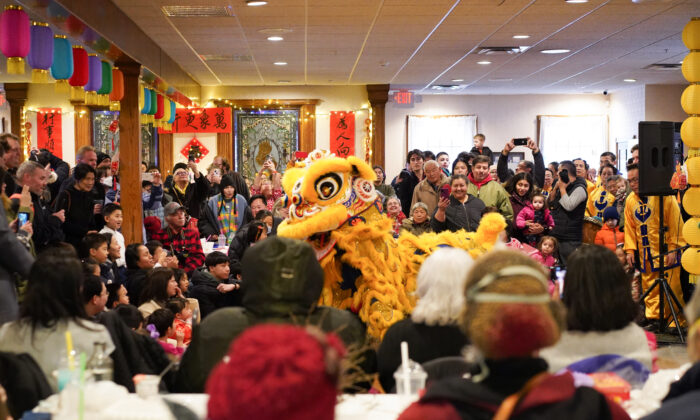 The celebration started at noon with a lion dance on Jersey Avenue, followed by a Chinese-style buffet and live performances at Erie Trackside Manor.

“We had a wonderful turnout. It was just crowded, with people shoulder to shoulder,” Port Jervis Tourism Board Chairwoman Laura Meyer told The Epoch Times. “I wish we had a room 10 times larger.”

Jin Pang, a Tourism Board member and organizer of the event, chose the word “jing,” which means pure and clean in Chinese, to represent the spirit of the Year of the Rabbit.

“Rabbit is pure white,” Pang told The Epoch Times. “In the new year, we want to bring hope and purity to the world.”

For Port Jervis resident Georgine Hoge, this is her third time attending the annual event, which started in 2019 and was interrupted for two years due to the pandemic.

“It’s nice to see they come out here to share the culture,” Hoge said. “The dragon dance is just amazing, and the little kids that we saw singing New Year’s songs—that is just so heartwarming.”

Putnam County resident Joanne Casella, who used to take American students to China through the Washington-based People-to-People program, was happy to find Chinese cultural events not far from her home.

“I love it when people share their culture. America is a melting pot. We are all people, and we need to be together,” Casella said. “We need more of this, more understanding of each other because there is so much hatred and negativity going on in our country now.”

She came with several friends whom she met through an online meet-up group, including Brian Callahan, a bass clarinet player who enjoyed the erhu, a Chinese two-stringed bowed instrument.

“It was so different from what I’ve ever seen or heard before. It is enchanting,” Callahan said.

“I really enjoy this,” he said. “I enjoy the different cultures that we are exposed to in Port Jervis, which [in the past] was not exposed to a lot of things. This is all wonderful.”

Crawn noted that many Chinese residents in the area are Falun Gong practitioners seeking refugee from persecution in communist China.

Falun Gong, also known as Falun Dafa, is an ancient spiritual practice that incorporates slow, meditative exercises and moral teachings based on the principles of truthfulness, compassion, and tolerance. It grew in popularity during the 1990s, with 70 million to 100 million adherents in China by the end of the decade, according to estimates at the time.

Feeling threatened by its popularity, China’s ruling Communist Party and its then-leader Jiang Zemin launched a persecution against Falun Gong in July 1999. Since then, millions of adherents have been thrown into prisons, labor camps, and brainwashing centers, where many have also been abused, tortured, and killed for their organs, according to the Falun Dafa Information Center.

“They are just looking for a place that is safe,” Crawn added.

Around 30 vendors lined up at the indoor venue, offering various products, such as handicrafts, jewelry, and chocolate.

Melissa Romeo, a vendor from Dingmans Ferry, Pennsylvania, liked the event’s vibe and the crowd it drew.

“This brings the community together, with positivity, offering a free place for them to come and enjoy the cultural shows,” Romeo said. “It is a good aura all around.”

Skoufis condemned the recent mass shooting at a Chinese New Year celebration near Los Angeles, adding that he would always stand behind the local Chinese population in his district.

Neuhaus told a cheering crowd at the event: “We have so much to be grateful for in Orange County for all the contributions from our Chinese residents, their cultures, and investments. We are so proud to celebrate the new year, the Year of the Rabbit, and I’m so happy to be part of this wonderful celebration.”

Other upcoming events include St. Patrick’s Day Parade on March 5, Fall Foliage Festival on Sept. 24, and Christkindlmarkt on Nov. 26, according to Meyer.