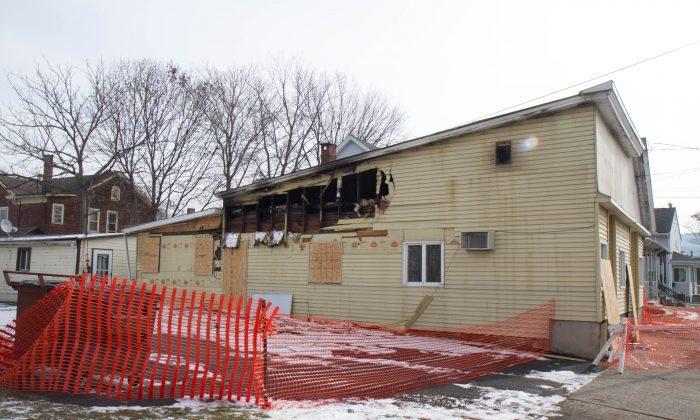 The side of 80 Jersey Avenue in Port Jervis on Jan. 15, 2016, two days after a fire in the building destroyed two businesses and severely injured one person. (Holly Kellum/Epoch Times)
New York

The Times Herald-Record reported that resident Scott Baker suffered burns to his feet, legs and hands. Witnesses say Baker was covered in soot and wearing charred strips of clothing when he escaped through a broken window. He was taken to a hospital in Westchester County.

Officials say the fire broke out around noon on Jan. 13 at 80 Jersey Avenue  and destroyed hair salon Color Me Crazy and thrift shop My Sisters Treasures, which just opened last summer.

Color Me Crazy started a GoFundMe campaign which reached $1,660 as of Jan 14. Through Facebook they asked clients to contact them to keep them updated on their move, and for help finding a new place, “Especially if you have a current apt.”

One day after the fire, they announced they were moving to 9 West Main Street and would be opening Jan. 26.

“This isn’t going to hold us down long. Thank you for being part of our lives.”

The fire is believed to have begun in the apartment but is still under investigation.

Baker told police he was sleeping and awoke to see the place on fire with most of the flames coming from the kitchen.

With additional reporting by Holly Kellum