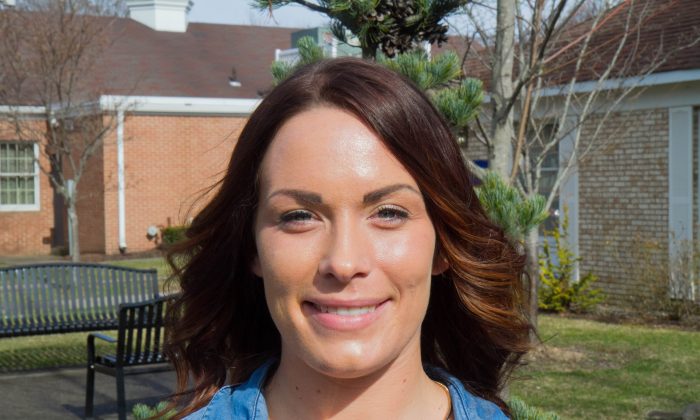 PORT JERVIS—With a federal grant in place and a new, full-time coordinator, the community group Operation Port Jervis PRIDE Coalition is now positioned to begin battling substance abuse in the city in earnest.

Lindsay Carroll, who is a Port Jervis native, took up the position the beginning of February and says she’s glad to be working for positive change in the community she calls home.

The 26-year-old studied psychology at University at Albany-SUNY then came back to Port Jervis in 2011 and worked as a service coordinator at New Hope Community, an independent living facility for people with intellectual and developmental disabilities in Loch Sheldrake.

She now has the task of working with over 30 community members and groups to lower the city’s substance abuse, with a focus on lowering the use of alcohol, marijuana, and opioids among youth.

Right now she is in the planning stages and working with the coalition and her advisor, Dawn Wilkin the assistant director of prevention services at Catholic Charities, the grant’s fiscal agent, on long and short term plans for her position.

She is also planning a few Operation Port Jervis PRIDE activities, which coalition Chair Valerie Maginsky said has been a “relief” since their coalition is all volunteers.

Maginsky said they were looking at the grant almost from the coalition’s inception and were glad when it was awarded. Carroll’s start also coincides with Operation Port Jervis PRIDE becoming a 501(c)(3) nonprofit.

“We were used to doing things off the cuff,” Maginsky said. “Now we’re becoming more formalized.”

Over the next few months, Carroll will be attending three weeks of training put on by the federal Substance Abuse and Mental Health Administration (SAMSHA), one of the grant’s parent agencies, that will help her come up with realistic goals and strategies to meet those goals.

Carroll’s main task at this point is working on bringing as many people and organizations into the coalition as possible, and so far, she says, the response has been good.

The coalition has a steering committee of 14 members and a larger community group of over 30 members  that meets the third Thursday of the month, alternating between a 12:30 p.m. luncheon at the Erie Restaurant and a 7:00 p.m. meeting at City Hall.

“We’ve had a really tremendous response from the community—the school, the police department—everybody’s really involved,” Carroll said. “I can only look forward to it getting bigger.”

Port Jervis was one of 13 communities in the state to be awarded the Drug-Free Communities grant in 2015 and the last city in Orange County to receive it.

Middletown is in its ninth year this year and Newburgh finished its tenth year in 2014.

The $125,000-a-year grant is almost guaranteed for the first five years if the community keeps up on it’s paperwork, and in the sixth year will have to reapply. If awarded again, the grant is extended for another five years.

The funding is tied to testing, and in Port Jervis’ case it is the high school and middle school students that have to be tested every two years as one of the grant’s mandates.

The students were just tested last year in a county-wide survey that Wilkin said they are preparing to give the results of in several community presentations.

“A lot of times with coalitions in the beginning, it’s a lot of education,” said Wilkin, who has been working on coalitions since 2000.

“If we’re going to give the marijuana numbers that came back, we’re going to educate about ‘What do you look for?’ to the parents in the home … so we can take question and answer from the community and if somebody needs services, we can say, ‘This is where you can go.'”

The Middletown Cares coalition formed shortly before the city received the Drug-Free Communities grant, and was successful at meeting their first five-year goals, but they did adjust them.

They went from working on all substance abuse to just marijuana and alcohol, the two most-used substances at the time, although alcohol was and is far more prevalent, she said.

The coalition worked with law enforcement to crack down on places that were selling alcohol to minors and that brought down alcohol use among surveyed high school seniors by double digits, Kimple said.

But most important is the community involvement, and thinking about sustainability.

I think Port [Jervis] is a close-enough knit community that, I keep saying it, I really think you guys are going to have some good stuff going on here.
— Dawn Wilkin, Assistant Director of Prevention Services, Catholic Charities

Wilkin said it takes about 20 years to do substance abuse-prevention planning, and when she worked on the Drug-Free Communities grant in Newburgh, the coalition took the last year to divvy up the outgoing coordinator’s responsibilities so the momentum they started would be carried on.

“As you start to age out, you have to start giving some of these responsibilities back because you know the funding won’t be there so you have to think about who can take on what piece,” she said. “I have seen in coalitions, and not just around here, where they’re not prepared for that, and if the partners don’t step up at that point, then all the hard work they’ve done can then go.”

In Newburgh’s case, they got another five-year state grant through the Office of Alcoholism and Substance Abuse Services (OASAS) to fight opioid addiction so they were able to hire another coordinator.

She cautions people not expect to see results overnight now that Port Jervis has a coordinator, funding, and a coalition, but she does expect they will meet their goals.

“I think Port is a close-enough knit community that, I keep saying it, I really think you guys are going to have some good stuff going on here,” she said.