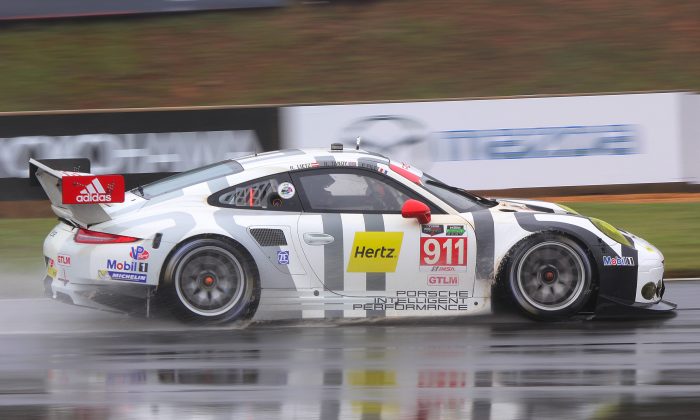 BRASELTON, Ga.—After eight rain-lashed hours of racing, the checkered flag waved to end Petit Le Mans, the Tudor United SportsCar Championship season finale. Leading the field through the final laps was not one of the ultra-aerodynamic, high-powered, high-tech Prototypes, but the GT Le Mans-class #911 Porsche North America RSR—a car about as powerful and as highly developed as any of the prototypes but usually relegated to the middle of the grid.

The slickness of the rain-soaked track negated the aerodynamic advantage of the prototypes, giving the GT Le Mans cars a chance to compete on even footing—and compete they did. Both Porsches and both of the Corvettes led the race overall at various times, and when race director Beaux Barfield decided that the constant rain and gathering gloom made further racing unacceptably unsafe, it was the #911 Porsche driven by Patrick Pilet, Richard Lietz, and Le Mans winner Nick Tandy who led the pack.

In a statement later Tandy said, “The last stint when the rain became heavier was the toughest that I’ve ever driven in my career. To win the big and the petite Le Mans means a great deal to me. It’s every driver’s dream.”

The overall win gave Porsche the Manufacturer and Team titles in GTLM, and earned Patrick Pilet the Drivers title.

Half the race, which was scheduled for ten hours, was run under yellow flag, and was red-flagged for an hour due to dangerous track conditions caused by the constant rain. The race restarted at 7 p.m. because the rain let up briefly, but the rain re-intensified, the radar picture showed no sign of respite, and the track lights and headlights couldn’t pierce the mist. ” I felt like I’d be putting drivers out there completely blind,” Barfield told Sportscar365.com.

Race director Beaux Barfield had to choose between running for two hours under yellow, even then risking wrecks as the conditions were so bad, or ending the race early before a disaster happened. Barfield chose safety, and the checkered flag waved at 8 p.m.

Porsche’s GTLM victory marked the first time in the history of the Tudor series (and the second time this century) that a top-tier North American sports car race was won by a GT car. Normally, the purpose built prototypes have a huge edge over the GT cars, which are modified production cars—quick cars, to be sure: Porsches, Corvettes, Ferraris, Aston Martins—but still, street cars with wings and wide tires.

With the rain at Petit Le Mans, the prototypes couldn’t get going fast enough for their vastly greater downforce and lower drag to play a factor.

Prototypes are normally much faster down the straights because they are slipperier, and much quicker through the corners because their downforce keeps them pinned to the road. To get maximum effect the cars have to keep the speeds high to maximize airflow over the wings and bodywork—the faster they go around corners, the faster they can go. After days of rain and nonstop precipitation on race day, the Road Atlanta tarmac was covered with a film of lubricating liquid—the tires never really hit the road.

Even without their aerodynamic advantages, the prototypes were still extremely powerful cars, bu so were the GTs. The fastest lap of the race, a 1:28.420, was turned by Christian Fittipaldi in the #5 Action Express Coyote-Corvette prototype. Second fastest was Patrick Pilet in the winning GTLM #911 Porsche at 1:28.874, less than half a second slower.