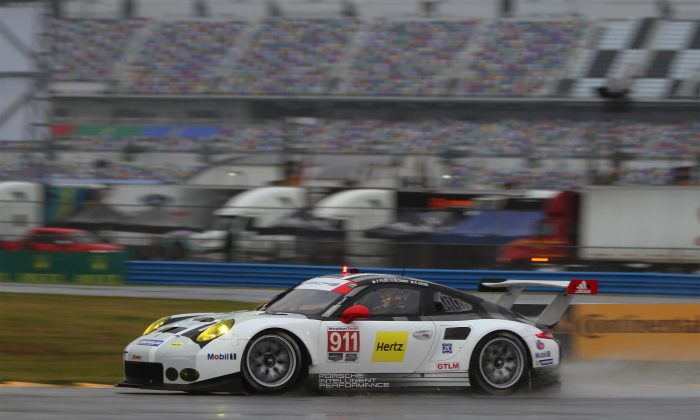 DAYTONA BEACH, Fla.—Rain turned the first day of practice for the 2016 IMSA WeatherTech Rolex 24 at Daytona into a wet-weather testing session, and handed qualifying to the GT-Le Mans cars.

Porsche, as it did at Petit Le Mans last year, proved to be the most able ride in the wet, with Petit winner Nick Tandy in the #911 Porsche North America RSR lapping the 3.56-mile Daytona road course in 2:01.408 at ,05.56 mph, beating team mate Frederic Makowiecki in the #912 sister car around Daytona’s 3.56-mile road course by nine-tenths of a second.

Tandy barely got his lap in. The session was red-flagged after five minutes when Gianni Bruni spun the #72 SMP Racing Ferrari F488 GTE, and clean-up ate up the session time. An extra few minutes were added to meet the 10-minute requirement, which meant drivers got a couple laps to heat the tires and on flyer—that hot lap had to be good. Tandy’s was.

“When we went out after the red, there was only time for one flying lap,” Tandy said after the session. “The risk of going off and getting higher on the grid was really high. We got the cars one-two on the front row, and that’s what we wanted.”

Porsche also snared the GT Daytona pole, with Park Place Motorsports driver Norbert Siedler putting the #73 Porsche GT3 R on the class pole. “The Porsche is a car you want in conditions like this, the Porsche is always good in the rain,” said Siedler at the post-qualifying press conference.

The first prototype on the grid was the Prototype Challenge #20 BAR1 Motorsports Oreca of Johnny Mowlem, eight overall with a lap of 2:05.708 at 101.951 mph. The PC cars couldn’t go fast enough to generate downforce, which made them a handful on the slick track.

“The conditions today were absolutely dreadful, I was actually getting sideways on the banking,” Mowlem said. “It shows how hard it is with the LMPC cars. I actually qualified quickest ahead of the prototypes, but I don’t think they are going to let me start in front.”

Fastest of the Prototype class was the new SMP Racing BR01-Nissan, which IndyCar ace Mikhail Aleshin pushed around the track in 2:05.793 at 101.882 mph.

Aleshin, who made his debut in IndyCar in 2015 while also driving the BR01 in the European Le Mans Series and World Endurance Championship, was impressed—not favorably—by conditions during qualifying.

“At the end of the session, the conditions were really difficult. Probably the most difficult I’ve driven in my career,” he said. “At the end of the session, the track conditions became worse and it started to rain more. I almost hit the wall a couple of times on my fastest lap. Surprising for myself, I managed to stay on track and first in class.”

Because IMSA declared the session mixed, rather than dry or wet, meaning cars could choose rain- or intermediate tires (or slicks) the order for the starting grid for the 2016 WeatherTech Rolex 234 at Daytona will not follow the actual qualifying results. After a mixed session, cars are lined up by class, with the Prototypes leading PC, followed by GTLM and GTD.

This puts the SMP BR01 on the pole, with the #2 Extreme Speed Motorsports Ligier-Honda and the #60 Michael Shank Racing Ligier-Honda following.

Wet Practice Reveals Nothing About the Race

With the entire day’s practice run in damp or wet conditions, teams didn’t have a chance to test race set-ups or make adjustments to suit the conditions they will face during the race.

The 2016 IMSA WeatherTech SportsCar Championship Rolex 24 at Daytona takes the green flag on Saturday, Jan.30. Tickets are available through the Daytona International Speedway website, or by calling 1-800-PITSHOP.

Check IMSA.com for TV broadcast times and channels, and for live timing during the race.