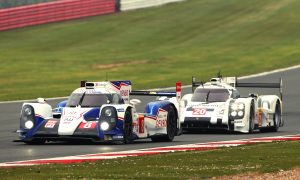 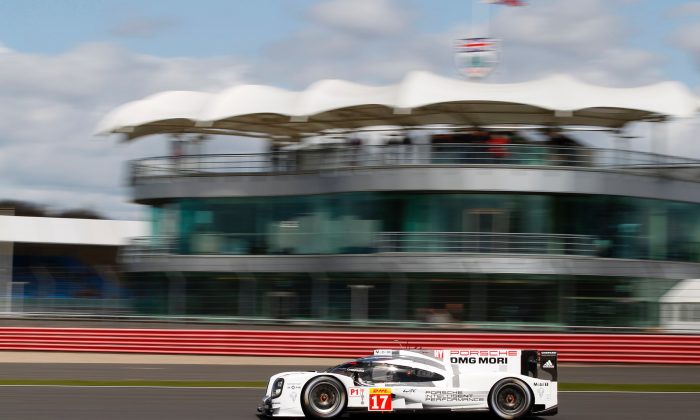 The #17 Porsche 919 Hybrid of Timo Bernhard, Brendon Hartley, and Mark Webber streaks past the buildings at Silverstone on its way to qualifying for the pole at the WEC Six Hours of Silverstone, April 11, 2015. (presse.porsche.de/)
Motorsports

“It was a great team effort,” Mark Webber told Radio Le Mans after the session. “Qualifying went pretty good for us but we’re not getting too carried away. We wanted to put the cars in the best possible spot on the grid, and we’ve done that.

“The #17 crew has been pretty comfortable all weekend but we’ll have a really tough fight on our hands tomorrow with the Audis and Toyotas. It was a smooth session and I think tomorrow’s race will be really enjoyable.”

Webber said the updated Porsche 919’s upgraded ERS system( for 2015 Porsche moved up to the top ERS class of eight megajoules of energy recovered and released per lap) took a huge leap of faith (“incredibly optimistic,” he called it ) but is working out so far, though “we’re still learning a lot with that was we go on, to be honest.

“I think Silverstone is probably not the best venue for us in terms of getting the most out of [the upgraded ERS] but that’s the way it is. Le Mans it should be a nicer circuit for us.

“Tomorrow we are going to get the maximum result and earn some champagne.”

“On my first lap I made a mistake, and on my second I lost time again because of traffic,” Dumas said in a press release. “But the most important thing is we are at the front. What counts is tomorrow’s race.”

Neel Jani added “It wasn’t that easy to go straight from the wet to qualifying mode, as our set-up wasn’t quite right. But having qualified first and second is super for our team. We have reached today’s target and tomorrow we want to fight for the race win.”

That extra set of tires could play a major role: Porsche is notoriously hard on its tires, or it was last year. if the new car, with more ERS energy, still tears up the rear tires, the #18 car might have an edge in the last stint.

“I’m happy with our grid position even though in the end only twelve hundredths of a second were lacking for the first row,” Lucas di Grassi told audi-motorsport.info. “We know that our competitors are in a better position in qualifying, but I’m confident that we’ll be able to attack across the race distance and are going to deliver a thrilling race to the fans.”

“Qualifying was slightly better than expected which is positive,” Davidson told toyotahybridracing.com. “Congratulations to Porsche, who we always expected to be on pole but I’m quite pleased with our performance. The car felt good. I’m happy with the balance and I’m looking forward to the race when it could be a different story. It should be interesting.”

“I’m a little bit surprised to have such a strong qualifying pace; it’s better than we anticipated,” said Nakajima. “I’m happy with the car and with the session. It’s a pity I lost a little time through the traffic in the final sector of my lap. Without that we could have got second place but it’s a long race and our performance level seems strong which is a good sign. I’m looking forward to an exciting race.”

Sixth-tenths of a second covered the top four cars, which is amazing considering the variety: Porsche uses a 2-liter V4 with a battery ERS system, Audi uses a 4-liter V6 diesel and a flywheel ERS, while Toyota is powered by a 3.7-liter V8 and a supercapacitor system.

The #7 Audi and #2 Toyota qualified fifth and sixth; judging from lap counts, their team cars took fresh tires as did Porsche, while the #7 and #2 used only one set for qualifying.

The FIA World Endurance Championship Six Hours of Silverstone will be televised on Fox Sports 1 starting at 7 a.m. ET in the United States. Tickets can be had via the Silverstone website. Timing and scoring and other viewing options are available through http://live.fiawec.com.