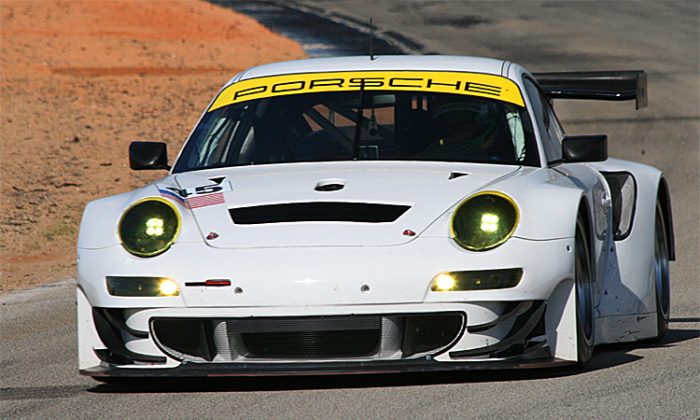 The improved aero kept the No.45 Flying Lizard Porsche glued to the track; balance was a bit tricky. (James Fish/The Epoch Times)
Motorsports

SEBRING, Fla.—Porsche delivered its brand new 2012 Porsche 911 GT3 RSRs to several American Le Mans Series teams for the ALMS Winter Test that was held Feb 8–9. A lot of teams had troubles setting up the new cars at first, but by the end of the final session, lap times were coming down.

During the Thursday lunch break, Jens Walther, president of Porsche Motorsport North America and Patrick Long, Porsche factory driver working for Flying Lizards, talked about some of the features of the new car.

As for the car itself, Walther pointed out that the track was wider, the front- and rear-end aero totally new, and the air intakes were now through vents in the front of the rear fenders. Also, the car now used taller, wider tires. The drivetrain is unchanged from 2011; Porsche put all its efforts into making the chassis work better.

These changes created problems for Porsche teams—all their setup information was now invalid. None of the teams using the new, wider, 2012-spec GTs were finding it easy to adapt—neither Corvette or BMW could match the pace of the Ferraris—but Porsche, because it supplies the most teams, had the most teams struggling to find answers.

Patrick Long offered a driver’s-eye view of the new platform. The first thing he pointed out was that the car finally had the front-end grip Porsche drivers had been begging for, for years. Being rear-engined, the Porsche 911 had always had ample rear traction but couldn’t get the front end to stick. The new chassis and bodywork addressed that issue.

“The wider track and bigger front end—I could feel it right away, when we first went out to bed the brakes,” Long told the reporters gathered in the Flying Lizard pavilion. “It was more responsive, it was a little heavier in my hand. I have a more responsive front end—that’s what we have been pushing the engineers to bring us—give us more front grip.

“We have more rear aero at our disposal but until we can balance it with front grip, the rear isn’t going to do us any good. Everything, between the splitter, the wider front, the wider track—everything is giving us more grip in the front to where we can then make more aero in the rear.”

Next: Long describes the new car’s performance and potential