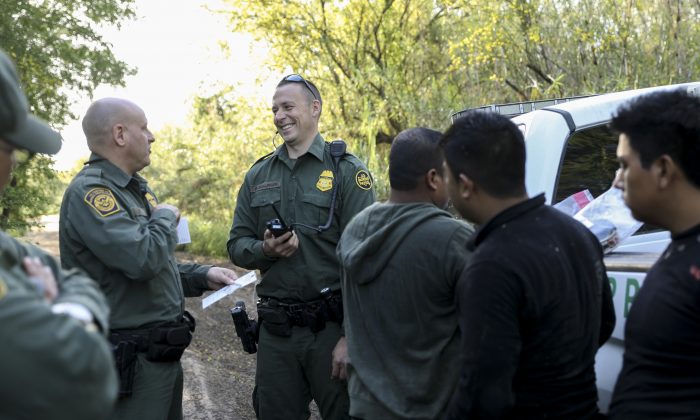 TECUN UMAN, Guatemala—Boris, who declined to give his last name, was waiting by the Guatemala–Mexico border for his mother to wire some money from California.

He had four quetzales on him (54 cents), and the extra money wouldn’t arrive until the next morning, so he was stuck without the 10 quetzale ($1.35) fare across the Suchiate River to Mexico.

The 38-year-old had just been deported back to El Salvador, but he immediately restarted the trek north.

“I was almost to Tijuana,” he said on June 25, adding that he was “going to try one more time” to get into the United States, illegally.

Boris said he was deported from the United States on Feb. 4 after being picked up at the California restaurant where he worked by Immigration and Customs Enforcement (ICE).

“I stayed a little bit working in my country to make a couple of bucks and then tried to come back—and I got deported from Mexico,” he said.

He said he previously lived with his mother in Ventura County, California. She cleans houses for a living and is in the U.S. legally.

Boris said, this time, if he makes it back undetected, he will look for a job in landscaping or construction. He’s not concerned about being deported from the United States again. “I’m not worried about it. I’ll just be more careful with working.”

“After July 4th, a lot of people are going to be brought back out. So people that come up may be here for a short while, but they’re going to be back to their countries,” he said during a bill signing in the Oval Office on July 1.

At the behest of Democrats, Trump had given deportations a two-week reprieve after announcing on June 17 that ICE would start deporting “millions” of illegal aliens who had already been ordered to leave the country.

Honduran Juan Mendez had made it across to Mexico already and was waiting in Tapachula for his legal documents from Mexico’s National Migration Institute.

He said he crossed into the United States illegally in 1999 and was deported two months ago after living in Idaho for 20 years. His wife is from Mexico, but she is a U.S. citizen, along with his two children, aged 7 and 18 months.

Mendez said he was deported after being stopped for driving without a license. ICE was waiting at the police station. He said he is unable to go back to the United States for 20 years.

He said he was going to stay in Mexico and get a job, so that his family can visit, but the allure of the United States may prove stronger once he gets closer.

Border Patrol agents have apprehended thousands of illegal aliens re-entering the country after being deported—many of whom have criminal convictions.

Customs and Border Protection (CBP) has arrested more than 19,000 convicted criminals since the beginning of 2019, according to data released by ICE on July 1.

In the month of June, CBP issued news releases about 10 convicted criminals who were trying to re-enter the United States.

Convicted felons who re-enter the United States after deportation, face a maximum sentence of up to 20 years in prison.

On June 1, a Mexican national was arrested by San Diego Border Patrol agents. The 41-year-old man had multiple prior convictions, including for aggravated sex abuse of a child in the state of Utah in 2000, according to CBP. He was deported in January 2001.

The next day, in the same sector, a 33-year-old Mexican national was arrested. Records showed he had a previous conviction of sexual intercourse with a minor in Los Angeles in 2004.  The man was sentenced to 27 days in jail and subsequently deported to Mexico in April 2005.

A convicted murderer from Mexico was arrested after illegally entering California on June 4. Mario Sagasta Rodriguez, 59, had served more than 30 years in prison for the murder and was deported in February 2017.

A child molester was arrested by Yuma agents on June 19 after he illegally entered the United States with a group of family units. Juan Rojas-Rodriguez, 41, a previously deported Mexican national, was convicted of sex with a minor under 14 years of age in California in 1996. Rojas-Rodriguez was last deported in 2008.

In El Paso, Border Patrol agents arrested a previously deported sex offender as he attempted to enter the United States illegally on June 20. Juan Carlos Bustamante-Pena, 30, previously served two years in a Colorado youth corrections facility for a 2005 felony sexual assault. He was deported in January 2009, and then arrested again four years later for illegal re-entry.

Eagle Pass Border Patrol agents arrested 45-year-old Mexican national Pedro Tiempo-Garcia on June 20. Tiempo-Garcia was arrested in Rocksprings for murder in 2001, subsequently convicted of attempted capital murder, and sentenced to 22 years incarceration. He was deported in February 2019 after serving 18 years of his sentence.

Tucson Sector Border Patrol agents arrested a 29-year-old Ecuadorian national after he entered the country illegally in Nogales on June 21. The previously deported man, Walter Patricio Juela-Pinancela, has a violent criminal history, including an aggravated felony conviction in New York for a 2016 statutory rape.

A Mexican national with a previous conviction for attempted murder was arrested for illegal entry on June 23. He had been deported in 2011 and has an extensive criminal history, according to CBP.

Eagle Pass Border Patrol arrested a Mexican national on June 24 with a 2004 conviction for aggravated criminal sex abuse. He was previously deported to Mexico in April 2012.

Several hours later, in the same sector, agents arrested a Honduran national who was arrested for sexual assault in 2010, and convicted of that crime and subsequently deported in 2011.

More than 91 percent of them had received criminal convictions or pending criminal charges, according to Nathalie Asher, ICE executive associate director.

But ICE has also had to divert resources to the border crisis, which has resulted in a 14 percent drop in administrative arrests compared to the same time last year.

Due to a shortage in detention capacity, ICE has released more than 200,000 migrants into the U.S. interior since Dec. 1, 2018, then-acting ICE Director Mark Morgan told reporters on June 19.

Nearly 90 percent of recent asylum-seekers have failed to report to court for their proceedings, he said.

In total, more than 1 million illegal aliens in the United States have deportation orders.

“[They] entered the country illegally, filed a false claim, have received due justice through the immigration proceedings, and they’ve found to be false, and they’ve received a deportation order removal,” Morgan told The Epoch Times in a previous interview. “A million, and they still remain here illegally.”