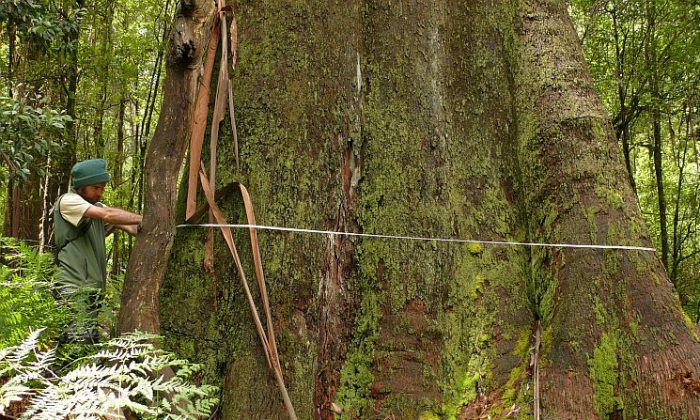 A Californian redwood. More than 95 percent of California's majestic coastal redwoods have been lost to logging and forest clearing, part of an accelerating global trend, according to new research. (R. Butler)
International

Population of Old-Growth Trees Being Decimated

The world’s largest organisms—old-growth trees—are a “barometer of the health of our planet,” says Bill Laurance, professor of Conservation Biology at James Cook University in Australia.

“Their decline foretells a world where ancient behemoths are replaced by weedy, short-lived trees that can grow anywhere, where forests store less carbon and sustain fewer dependent animals,” says Laurance.

New research in Australia and the United States highlights an alarming trend: the decimation worldwide of the awe-inspiring giants—the manna gum, the Australian mountain ash, the giant redwood, and the giant sequoia.

The American poet, John Muir, whose love of the sequoia and other flora native to the United States drew him on frequent and lengthy wilderness sojourns, once wrote, “God has cared for these trees, saved them from drought, disease, avalanches, and a thousand tempests and floods. But he cannot save them from fools.”

According to Laurance, the number of large trees seems to be declining almost everywhere, with the biggest threats being forest fires, logging and land clearing, droughts, exotic weeds, pests, and climate change.

“They need stability and long periods of time—and both of those things are becoming very rare in our modern, rapidly changing world,” Laurance says.

Most of the world’s giant trees are located in North America, but it was research on Swedish tree populations that spurred the worldwide investigation of old-growth forests.

Sweden is home to a significant portion of Europe’s oldest large trees, mainly oaks. When researchers studied Swedish forestry records, which date back to the 1860s, they saw a dramatic decrease in the number of 100–300-year-old trees.

Olle Hojer, a researcher at the Swedish Environmental Protection Agency, explains, “Sweden’s oak woodlands are unique in an international perspective with exceptionally high levels of biodiversity, natural, and cultural heritage.”

“The future is uncertain for many of the trees, as they are often threatened by injury and lack protection against logging. Overgrowing of oak woodlands are also a major problem, which could kill many giant oaks,” Hojer says.

The discovery prompted scientists to look at the situation of old-growth trees in other parts of the world. Researchers from Australia and the United States have now conducted a global study of the large trees.

Laurance, who studied trees in the Amazon rainforest for 20 years, expanded his research.

“I began to realize that the high rates of tree death we were seeing there were also happening in many other places around the world,” Laurence says.

“Research is urgently needed to identify … strategies for improved management. Without … policy changes, large, old trees will diminish or disappear in many ecosystems, leading to losses of their associated biota and ecosystem functions.”