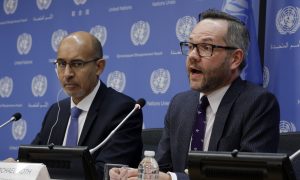 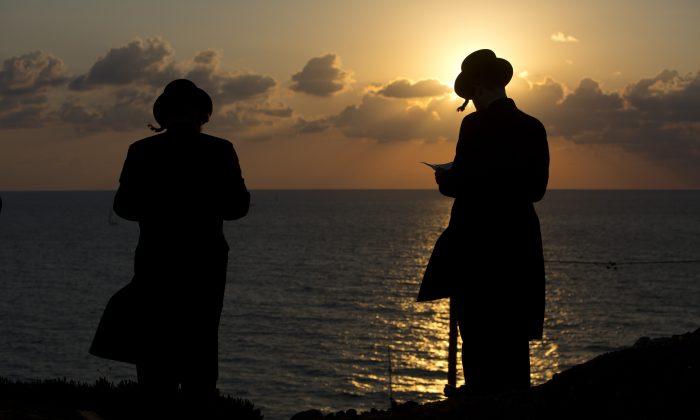 Ultra-Orthodox Jews of the Hassidic sect Vizhnitz gather on a hill overlooking the Mediterranean sea as they participate in a ceremony in Herzeliya, Israel, Thursday, Oct. 2, 2014. Tashlich, which means "to cast away" in Hebrew, is the practice by which Jews go to a large flowing body of water and symbolically "throw away" their sins by throwing a piece of bread, or similar food, into the water before the Jewish holiday of Yom Kippur, which start on Friday. (AP Photo/Oded Balilty)
Europe

Population of European Jews Has Continued to Shrink Since Holocaust

Europe’s Jewish population has remained on a mostly a downward slide since the end of the Holocaust, according to the Pew Research Center.

According to Pew Center numbers from 2010, the most recent year they have data for, there are 1.4 million Jews across Europe, or 0.2 percent of Europe’s population.

By contrast, the entire Jewish population of the United States is about 6.7 million, although about 1 million self-identify as having no religion or as being partly Jewish.

In Eastern Europe, there was once a large and vibrant Jewish population that has also shrunk steadily. Before the war, there were 4.7 million Jews. That dropped to 859,000 after the war and today sits at 70,000.

The population decrease in Europe has a variety of reasons behind it, including intermarriage and the many who have emigrated to Israel. Jews make up over 75 percent of Israel’s more than 6.2 million population.

Another contributing factor is related to a growing climate of anti-Semitism, evidenced in part by the recent terrorist attacks in Paris that included the massacre of Jews at a kosher supermarket by radical Islamists.

During a recent Holocaust remembrance event with Auschwitz survivors, film director Steven Spielberg told a group of Holocaust survivors that Jews still suffer very real threats in the world. Spielberg said that many Jews face the “perennial demons of intolerance” from those who would provoke hate crimes and are anti-Semitic.

Spielberg, the Oscar-winning director of the 1993 Holocaust film Schindler’s List, warned during his speech of “anti-Semites, radical extremists, and religious fanatics” who are again provoking hate crimes.

Spielberg also noted that there are now Facebook pages that identify Jews and their geographic locations with the intention to attack them, and a growing effort to banish Jews from Europe.

“These people … want to all over again strip you of your past, of your story, and of your identity,” he said. He stressed the importance of countering that hatred with education and preserving Auschwitz and other historical sites.