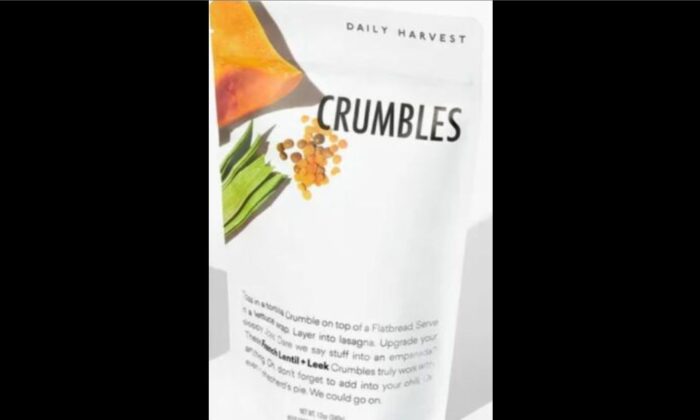 A vegan snack was recalled after hundreds of people fell ill and around 100 people were hospitalized, according to the company and federal health officials.

Daily Harvest said that it initiated a voluntary recall of its “French Lentil & Leek Crumbles” frozen product, according to the U.S. Food and Drug Administration (FDA). The agency said that it is investigating complaints of “gastrointestinal illness and abnormal liver function” related to the product.

In a July 14 update, the FDA said that 96 people have been hospitalized to date in about half of all U.S. states. About 277 illnesses have been reported.

Daily Harvest said it initiated a voluntary recall of the product in June after consumers complained of illness. Some reported hospitalizations and elevated liver enzymes, according to reports online.

An Oklahoma woman filed a lawsuit against the company, saying that she had her gallbladder removed because of one of the company’s products.

“I ate the crumbles twice, unfortunately. Both times, within 48 hours, I was in the emergency room,” Carol Ready told the Los Angeles Times.

Daily Harvest issued a statement in June in response to the lawsuit, saying, “Everyone who has been affected deserves an answer, and we are committed to making this right.”

Daily Harvest said that it has not yet determined the cause of the illnesses. On June 27, the New York-based firm said it is testing for different “toxins known as mycotoxins, including aflatoxins.”

“The first round of testing on the most common have come back negative but we continue to cast a wider net to ensure we are not missing anything,” the statement continued.

The product was sold via online sales and in two retail locations: the Daily Harvest store in Chicago and a “pop-up” store in Los Angeles.

Between April 28 and June 17, 2022, about 28,000 units of the recalled product were distributed to consumers in the 48 lower U.S. states via direct delivery and online sales as well as via the two stores. Samples were also provided to a small number of people, the FDA recall notice said.

“If you experience symptoms including yellowing of the skin and eyes (jaundice), dark urine, itching with no rash, gastrointestinal illness, nausea, fatigue, body aches, severe abdominal pain and/or fever after consuming this product, please consult with your healthcare provider,” according to the FDA. “Let your healthcare provider know you have recently consumed the recalled Daily Harvest French Lentil & Leek Crumbles. Healthcare providers should report these illnesses to their health department.”

The FDA notice said that Daily Harvest also “emailed consumers who were shipped the affected product, and other consumers for whom the company had contact information and consumers were issued a credit for the recalled product.”