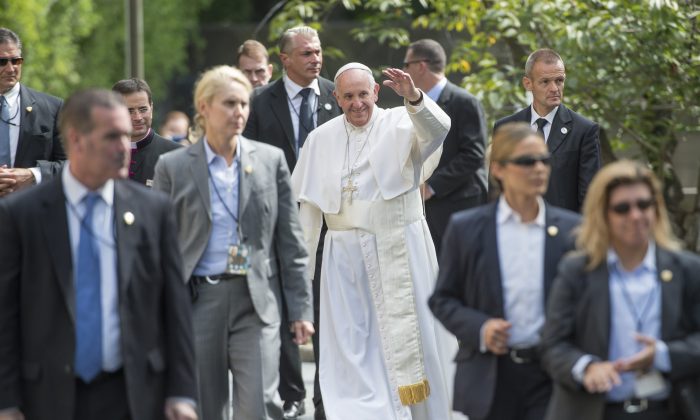 Pope Francis, surrounded by security, waves to well-wishers at the Apostolic Nunciature to the United States upon returning from his trip to Capitol Hill, on September 24, 2015 in Washington, DC. (MOLLY RILEY/AFP/Getty Images)
US

For the U.S. Secret Service, the highest level of security is what they call a National Special Security Event. This designation is reserved for major events, such as presidential inaugurations or NATO summits.

What makes the visit of Pope Francis to the United States so unique from a security perspective, is that this top-level security designation will be used at every juncture of his visit.

Chapa is familiar with such events, and knows of the unseen work ticking away behind the scenes. He was on detail when Pope John Paul II paraded down the streets of San Antonio, Texas, in 1987, and was involved with security for Pope Benedict XVI’s visit to Washington in 2008.

The Secret Service doesn’t typically roll out more than what’s needed. According to Chapa, the level of security they provide to each individual is based on the intelligence that’s gathered beforehand.

He noted that each September, when the various heads of state from around the world gather in New York for the United Nations General Assembly each head of state is given the level of security they deem necessary.

“If the intelligence is such that individuals are seeking to do harm to this person, the level of security goes up even higher,” Chapa said.

Assessments on whether a certain individual will be at risk also determines the amount of advance work the Secret Service needs to do—and this is what’s particularly unique about the level of security for Pope Francis’s visit.

His visit was designated a National Special Security Event by the Secretary of Homeland Security—and this means each of his numerous planned appearances across the country will receive a level of security on par with a presidential inauguration.

On top of that, the visit coincides with this year’s U.N. General Assembly and the pope is even addressing the Assembly on Sept. 25, adding to the scope of the security operations required for New York.

“Those designations are very rare,” Chapa said. “When these designations come into play, it says we need to bring resources together, and cooperate.”

When the National Special Security Event status is rolled out, departments including the FBI and local police are called up, and a new chain of command is formed, where the Secret Service plays a kind of coordinating role to request assignments for personnel of these departments.

The planning phase that unfolds plays out like a complex game of chess, where the opposing team can appear at any square on the board. The job of the defending team is to guess every possible angle of attack, and prioritize guarding the king while trying to make sure all the other pieces could weather an attack unscathed.

With the current events, Chapa said, “every move of the pope has been calculated and planned for.”

“My experience with that was when President Reagan passed away,” Chapa said, referring to Reagan’s June 2004 funeral that was designated a National Special Security Event.

During the proceedings, Chapa said he was given a coordinating role over various other departments. He noted that while “I wasn’t their boss,” he knew who to call.

He could, for example, call the head of the FBI in a location, and say a sheriff in another location needs support, and very likely the support would be forthcoming.

“I was kind of the umbrella,” he said, as the one managing the flow of information, and being in charge of emergency response teams.

For the Secret Service, preparing for such an event means thinking of all possible threats—mapping out every possibility, sweeping every location, checking every person, and still being flexible enough not to step on the toes of the person they’re guarding.

Behind the scenes, the FBI and other agencies will be watching electronic noise—which could include things like signs of radio jamming or frequencies used by small drones—and other sorts of things that Chapa said “could change the security tomorrow, or tonight, or en route from location A to location B.”

Secret Service agents are handpicked for each position. This means deciding who stays at their regular posts—such as guarding the president—and who is moved to new assignments for the event. Some agents are even trained with new skills precisely for such high security events.

“If we can be in control of the equipment, then we’ll do it,” he said.

Despite all these preparations, however, the Secret Service also tries to ensure they don’t take over everything. In the case of the pope’s visit, Chapa said, the Church is organizing the event, and the Secret Service will try its best to accommodate them.

“I know the agents have been working 12 or 18 hours a day for the past 10 days, planning for his arrival,” Chapa said.

“They have been planning not just among themselves and with federal agencies and local law enforcement, but also with the Church, because the Church plays the role of the staff in this event,” he said.

Chapa gave an example of when he was in charge of security when President Bill Clinton was visiting South America.

The host nation was unhappy because a Secret Service agent told them their military honor guard couldn’t be present with their military rifles fixed with chrome bayonets.

Chapa asked the agent what his concerns were. While they could check the rifles to make sure they weren’t loaded, the risk was of a soldier lowering his rifle and taking a stab at the president.

Rather that anger the host nation, or irritate a subordinate agent, Chapa chose the middle ground. “I said why don’t we take these guards back six feet,” he said. “And that resolved it.”

The core concept behind events of this magnitude, and coordination on this level, he said, is communication.

“Without that level of communication, we start to fight amongst ourselves,” he said, adding that behind the scenes of such events, “the unsung heroes are those who take the time to speak to people to find out what the expectations are, then find the way to make it work.”