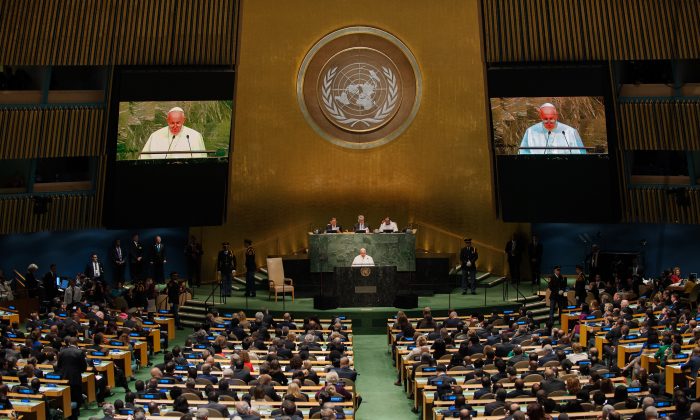 By promoting the hypothesis that humanity controls Earth’s climate, Pope Francis and United Nations Secretary General Ban Ki-moon undermine many of the goals of the Sustainable Development Summit, held on Sept. 25–27 in New York.

On Friday, Sept. 25, the U.N. General Assembly formally adopted the 2030 Agenda for Sustainable Development. The 2030 Agenda includes 17 goals and 169 targets “to wipe out poverty, fight inequality, and tackle climate change over the next 15 years.”

Although many Agenda objectives are crucially important—health promotion, hunger alleviation, and access to clean water, sanitation, and affordable energy, for example—goal No. 13 threatens to undo the lot.

Goal 13, “Take urgent action to combat climate change and its impacts,” includes the following note: “acknowledging that the United Nations Framework Convention on Climate Change [UNFCCC] is the primary international, intergovernmental forum for negotiating the global response to climate change.”

And there’s the rub. If goal 13 were focussed exclusively on helping vulnerable populations adapt to climate change, there would be no problem. While adaptation is already included in goal 1 (ending poverty), goal 2 (hunger), and goal 11 (improving cities), and so is not really needed as a separate objective, it does not imperil the accomplishment of other goals. However, by saying that goal 13 is driven by the UNFCCC, it becomes a serious threat to most of the rest.

In 1990, the First Assessment Report of the U.N. Intergovernmental Panel on Climate Change stated, “It is not possible at this time to attribute all, or even a large part, of the observed global-mean warming to [an] enhanced greenhouse effect on the basis of the observational data currently available.” Scientists didn’t know what, if any, greenhouse gas (GHG) levels would cause dangerous climate change.

But this didn’t stop U.N. bureaucrats from creating, and politicians such as President George H.W. Bush from signing, the UNFCCC at the Rio Earth Summit in 1992. The “ultimate objective” of the UNFCC is nothing less than “stabilization of GHG concentrations in the atmosphere at a level that would prevent dangerous anthropogenic interference with the climate system.”

We still don’t know if our GHG emissions can cause dangerous climate change. University of Western Ontario professor Chris Essex, an expert in climate models, explains, “Climate is one of the most challenging open problems in modern science. Some knowledgeable scientists believe that the climate problem can never be solved.”

Yet a generation of politicians have created countless regulations and agreements to restrict GHG emissions, the most recent being President Barack Obama’s Clean Power Plan (CPP). In most cases, the CPP being an example, the GHG being targeted is carbon dioxide (CO2).

That there has been no appreciable global warming for the past 18 years, a period during which CO2 levels have risen 10 percent, makes no difference. It’s full speed ahead with expensive CO2 emission reductions.

This is having unintended consequences that counter the social-justice efforts of the United Nations and the Catholic Church. Here are two examples.

Dr. Ian D. Clark, University of Ottawa earth sciences professor, said, “By promoting the idea that CO2 emissions must be reduced, climate activists encourage the expanded use of biofuels. The result is that, in 2011, 6.5 percent of the world’s grain went to producing fuel instead of food, contributing to food price spikes that are a disaster for the world’s poorest people.”

He pointed to a February 2015 open letter to the European Parliament from 197 civil society organizations from Asia, Africa, and Latin America that asserted: “The destruction of forests and fertile agricultural land to make way for oil palm plantations is jeopardising the food sovereignty and cultural integrity of entire communities who depend on the land as their source of food and livelihoods.”

Clark advised, “Pope Francis and Ban should do nothing to encourage these social-justice violations.”

The focus on reducing CO2 emissions also makes it more difficult for developing countries to finance the construction of vitally needed power plants.

New Zealand-based alternative energy engineer Bryan Leyland gave an example: “South Africa was able to secure a $3.9 billion loan in 2010 to build the Medupi coal-fired power station only because developing nation representatives on the World Bank board voted for approval.

“The United States and four European nation members abstained from approval because of their worries about climate change. They seemed to want South Africans to use wind and solar power instead, sources too expensive for widespread use even in the wealthiest nations.”

Leyland concluded, “Rather than hypothetical future climate change, the Pope and Ban should help focus the world’s attention on the millions of Africans who suffer severe respiratory illnesses and extreme poverty because they lack an electricity supply—a supply that could be easily obtained from their fossil fuel reserves that rich people in Western countries don’t want them to use.”

The U.N.’s ongoing My World survey requests the public to prioritize world issues by asking, “Which of these are most important for you and your family?” The 8.4 million people polled to date have indicated that, in comparison with the problems they face today, they don’t care about climate change. Why are Francis and Ban not listening?