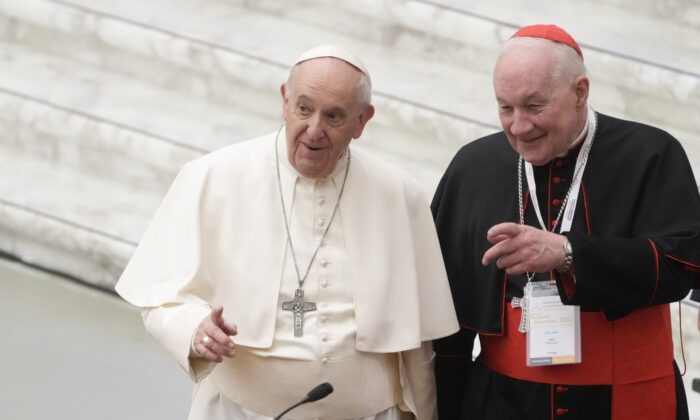 Pope Francis, left, and Cardinal Marc Ouellet arrive at the opening of a 3-day Symposium on Vocations in the Paul VI hall at the Vatican on Feb. 17, 2022. (The Canadian Press/AP/Gregorio Borgia)
Canada

The pontiff issued his statement through Matteo Bruni, director of the Holy See press office.

Allegations of sexual assault against Ouellet are part of a class-action lawsuit formally filed this week in Quebec Superior Court. A woman identified as “F.” accused the cardinal, once considered a front-runner to become pope, of several incidents of sexual assault between 2008 and 2010, including sliding his hand down her back and touching her buttocks at an event in Quebec City.

F. wrote a letter to Pope Francis in January 2021 regarding Ouellet and was informed that the Pope appointed Father Jacques Servais to investigate her allegations.

Bruni said that Servais looked into the matter and found “no grounds to open an investigation.” Bruni said that following consultations, “Pope Francis declares that there are insufficient elements to open a canonical investigation for sexual assault by Cardinal Ouellet against the person F.”

Justin Wee, a lawyer for F., said “she is very disappointed” that the Pope has ruled out a church investigation and that she is determined to defend her allegations in civil court.

The lawsuit in which Ouellet is named includes 101 alleged victims who have accused about 88 priests or diocesan staff of sexual assault. It is one of two lawsuits that were formally filed this week by Montreal-based law firm Arsenault Dufresne Wee Avocats against members of the Catholic Church in Quebec.