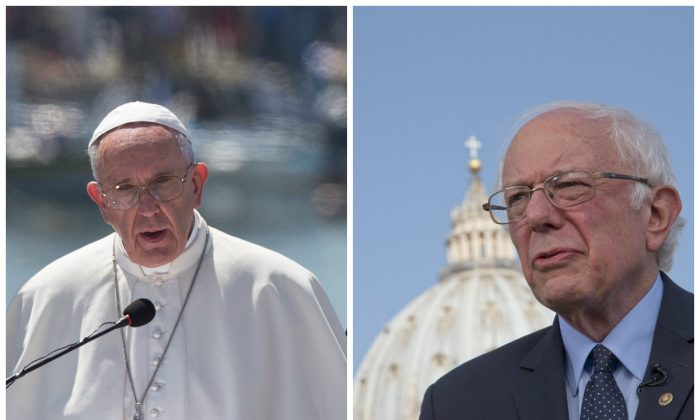 ROME—Pope Francis said his brief encounter Saturday with U.S. presidential candidate Bernie Sanders was a sign of good manners, “nothing more,” and hardly evidence of interfering in American politics.

The White House hopeful called it a “real honor” to meet “one of the extraordinary figures” in the world.

Francis was on his way to Greece to highlight the plight of refugees and Sanders was wrapping up his trip to Rome when they met in the lobby of the pope’s residence, the Domus Santa Marta hotel in the Vatican gardens. The Vermont senator had attended a Vatican conference Friday on economic inequality and climate change, and flew back to New York for campaign events on Saturday.

“This morning when I left, Sen. Sanders was there. … He knew I was leaving at that time and I had the kindness to greet him and his wife and another couple who were with them,” the pope told reporters traveling back with him to the Vatican.

When I came down, I greeted them, shook their hands and nothing more. This is good manners.
— Pope Francis

“When I came down, I greeted them, shook their hands and nothing more. This is good manners. It’s called good manners and not getting mixed up in politics. If anyone thinks that greeting someone means getting involved in politics, they should see a psychiatrist,” the pope said.

Sanders and his wife, Jane, stayed overnight at the hotel, on the same floor as the pope. Francis noted to reporters that members of the Vatican conference that Sanders had attended also were staying at the hotel.

Jeffrey Sachs, a Sanders foreign policy adviser, said there were no photographs taken of the pope and Sanders together.

The Vatican is loath to get involved in electoral campaigns, and usually tries to avoid any perception of partisanship as far as the pope is concerned, although Francis in February rebuked Republican presidential candidate Donald Trump over Trump’s stand on immigration.

Sanders Lags in Delegates but Leads in Likability

Popes rarely travel to countries during the thick of political campaigns, knowing a papal photo opportunity with the sitting head of state can be exploited for political ends.

But Francis has been known to flout Vatican protocol, and the meeting with Sanders was evidence that his personal desires often trump Vatican diplomacy.

Sanders said the meeting should not be viewed as the pope injecting himself into the campaign.

Sachs said Sanders saw the pope in the foyer of the domus, and that the encounter lasted about five minutes.

The trip gave Sanders a moment on the world stage, putting him alongside priests, bishops, academics and two South American presidents at the Vatican conference.

Sanders has been at a disadvantage during his campaign against rival Hillary Clinton, President Barack Obama’s former secretary of state, on issues of foreign policy. He was peppered with questions from academics and ecclesiastics during Vatican conference.

Once back home, Sanders was set to refocus on Tuesday’s pivotal presidential contest in New York, a state with a significant number of Catholic voters. Clinton holds a lead among the delegates who will determine the Democratic nominee, and Sanders is trying to string together a series of victories in upcoming contests to draw closer.