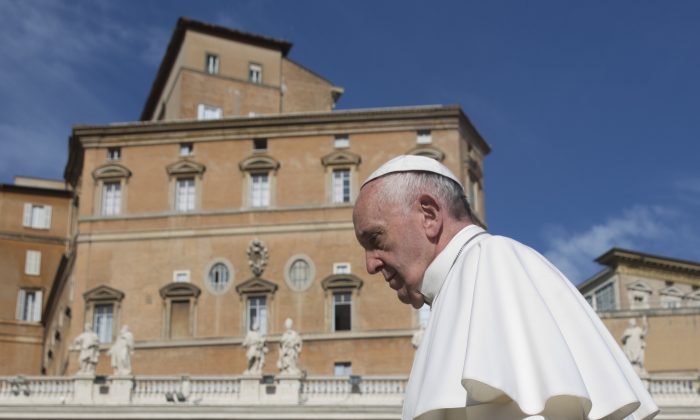 Pope Pledges to Continue Reforms in Face of Leaks

VATICAN CITY—In his first public comments on the latest scandal rocking the Vatican, Pope Francis told followers in St. Peter’s Square on Sunday that the theft of documents describing financial malfeasance inside the Holy See was a “crime” but pledged to continue reforms of its administration.

The pope said that publishing the documents in two books released last week “was a deplorable act that doesn’t help.” The books, “Merchants in the Temple” by Gianluigi Nuzzi and “Avarice” by Emiliano Fittipaldi, detail mismanagement and alleged greed in the Vatican, and are seen as part of a bitter internal struggle between reformers and the old guard.

“This sad fact will certainly not divert me from the reform work that we are pursuing with my collaborators and with the support of all of you,” the pope said to cheers from the crowd.

Among the disclosures in “Merchants in the Temple,” Nuzzi writes that the cost of sainthood can run up to half a million dollars and tells the tale of a monsignor who allegedly broke down the wall of his neighbor, an ailing priest, to expand his apartment.

Fittipaldi, meanwhile, claimed that a children’s hospital foundation had paid 200,000 euros ($215,000) toward the renovation of the apartment of the Vatican’s No. 2 at the time, Cardinal Tarcisio Bertone, and that nearly 400,000 euros donated by parishioners worldwide to help the poor was funneled to pay for Vatican administration.

The pope underlined that the leaked documents were the result of the reform course that he began and that measures had already been taken to address problems, “with some visible results.”

Pope Francis has made it a top priority to reform the Vatican bureaucracy known as the Curia, a hive of intrigue and gossip. He appointed a commission of eight experts in 2013 to gather information and make recommendations after an earlier expose helped drive his predecessor, Pope Benedict XVI, to a historic resignation. Two former members of that commission have been arrested as part of an investigation into the stolen documents.

Last week the Vatican described the books as “fruit of a grave betrayal of the trust given by the pope, and, as far as the authors go, of an operation to take advantage of a gravely illicit act of handing over confidential documentation.” It added that the publication did not help “in any way to establish clarity and truth, but rather generate confusion and partial and tendentious conclusions.”