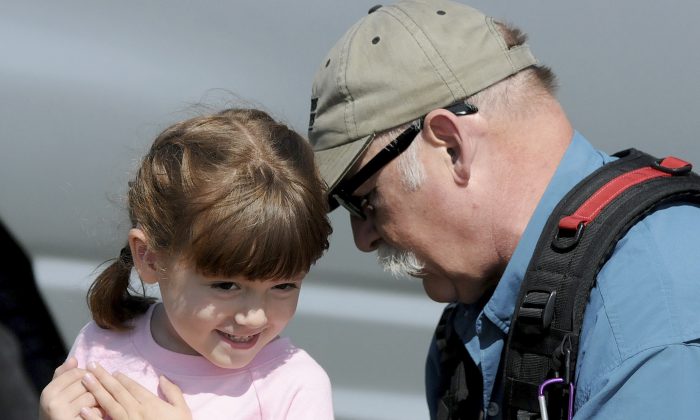 Elizabeth "Lizzy" Myers, left, being fitted for a microphone by a CBS sound man before taping a segment in Lucas, Ohio. (Jason J. Molyet/News Journal via AP)
US

Pope Francis to Meet With 5-Year-Old From Ohio

An Ohio girl, who suffers from a rare genetic disease, is going to lose her vision soon—but before she does, she will have one of her dreams come true—to meet Pope Francis and give him a hug, according to her parents.

Elizabeth Myers, 5, will meet the Pope on March 30, which is part of a “visual bucket list” her parents made for her.

Non-profit organization UNITALSI (an organization for disabled Catholic pilgrims), set up the life-changing experience for the girl.

The disease affects about four in every 100,000 children born in the U.S.

The special trip will include Elizabeth’s parents, Steven and Christine Myers, and her 3-year-old sister, Makayla.

They will be meeting Pope Francis at a general audience, “I just hope that whatever prayers he says are heard,” Steven Myers, her father told the Washington Post.

A Turkish Airline employee in Chicago saw Elizabeth on CBS, where the family told her story several months ago. The airline then offered the family free tickets to anywhere in the world, and they chose Rome—a place where they’ll not only get to see the pontiff, but also a vast amount of art.

“Lizzy, she’s one of those kids who likes art, and she likes big things. We thought the artwork in Rome and the big buildings and the sculpture would be something she would really enjoy,” Steven said.

Elizabeth suffers from Usher Syndrome Type II—but it won’t affect her sight until she reaches around 10-13 years.

I don’t want her to be limited by anything.
— Steven Myers, father

Elizabeth currently wears hearing aids due to auditory effects produced by Usher Syndrome. Her younger sister did not inherit the disease.

Usher Syndrome’s main symptoms are hearing loss and the degeneration of the eye’s retina, according to the National Institute on Deafness and other Communication Disorders (NICDH).

The disease affects about four in every 100,000 children born in the U.S.

There is currently no cure, however advocates are urging parents to look for signs of the disease in children so it can be treated quickly by providing educational programs and hearing aids, the NIDCH states.

‘It Doesn’t Get Any Better,’ Says Medical College Dean After Seeing Shen Yun

Elizabeth, who will be given free accommodation in Rome, hasn’t been told about her disease.

“How do you tell a 5-year-old, you know? She’s such a curious little girl, and so much of her life is through sight. I just can’t imagine trying to tell her that,” [Steven] Myers said. “I don’t want her to be limited by anything.”