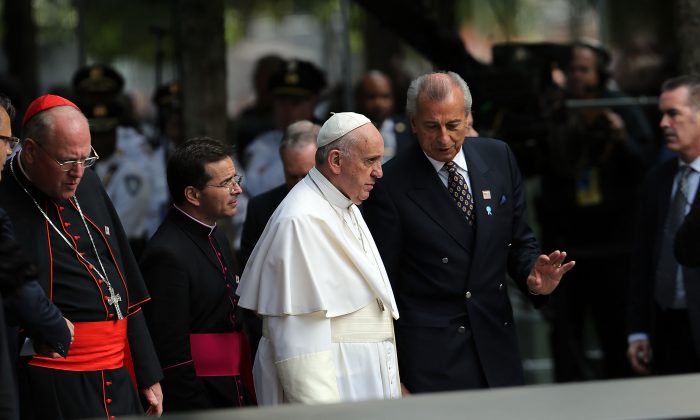 NEW YORK— In a day of both forceful words and eloquent silence, Pope Francis stood before the United Nations on Friday to decry the destruction of the environment through the “selfish and boundless thirst” for profit, then paid tribute to the victims of 9/11 with a prayer service at ground zero.

Francis’ agenda for his first full day in New York was packed with contrasts befitting a head of state dubbed the “slum pope.”

With a schedule expected to take him from the U.N. halls of power to a classroom in East Harlem, a parade through Central Park and a Mass in Madison Square Garden, Francis swept into a city riding a rock-star wave of popularity and was met with cheering, sometimes shrieking, crowds.

On Saturday morning, he flies to Philadelphia for a big Vatican-sponsored rally for Catholic families. As many as 1 million people are expected for the final Mass on Sunday.

The pope started Day 4 of his first-ever trip to the U.S. at the United Nations, where he declared that the environment itself has rights and that mankind has no authority to abuse them.

Hoping to spur concrete commitments at upcoming climate change negotiations in Paris, Francis said a “selfish and boundless thirst for power and material prosperity” has allowed the powerful to ravage the Earth and the exclude the weakest and most disadvantaged.

He demanded immediate access for the world’s poor to adequate food, water and housing, saying they have the right to the “three L’s” — Lodging, labor and land.

Francis’ speech, the fifth by a pope to the U.N., was a distillation of his recent teaching document on the environment, which has delighted liberals and environmentalists and drawn scorn from big business.

The pontiff made clear his belief that a “right of the environment” itself exists.

While his speech on the environment and the economy carried a message many liberals would welcome, Francis also affirmed the church’s doctrine on life issues: He called for the “absolute respect for life in all its stages” — including the unborn. He cited “moral law written in nature itself” in insisting there is a natural difference between men and women. The Catholic Church has been on a campaign to denounce “gender theory” and the idea that people can choose their sex.

And he repeated his denunciation of the “ideological colonization” of the developing world — a reference to how Western ideas about contraception and gay rights are often imposed on poor nations as a condition for development aid.

Conservative Catholics have criticized Francis for not focusing more on abortion, and they have complained in particular that by adopting the U.N.’s environmental agenda the church is compromising its stand on key life issues.

Francis was greeted on his arrival at the U.N. by Secretary-General Ban Ki-moon, a key supporter of his eco-friendly message. Ban praised Francis for his moral leadership.

“You are at home not in palaces, but among the poor; not with the famous, but with the forgotten; not in official portraits, but in ‘selfies’ with young people,” he said.

Among those in the audience was Nobel peace laureate Malala Yousefzai, the young Pakistani education campaigner who was shot and gravely wounded by the Taliban. She will be addressing the U.N. summit later. Also on hand were German Chancellor Angela Merkel and Bill and Melinda Gates.

The Vatican flag was raised for the first time just before Francis’ arrival. The General Assembly recently agreed to allow the U.N.’s two observer states, the Holy See and Palestine, to fly their flags alongside those of the 193 member states.

Francis’ speech, delivered in his native Spanish, received repeated rounds of applause. It contrasted sharply with the somber silence that greeted his visit later to ground zero for an interfaith tribute to the Sept. 11 victims.

After praying before the waterfall pools that mark the footprints of the fallen twin towers, Francis met with relatives of the 3,000 victims whose names are inscribed on the waters’ edge.

Moving into the underground memorial museum, he joined a rabbi, an imam and other faith leaders to pray for peace.

“I trust that our presence together will be a powerful sign of our shared desire to be a force for reconciliation, peace and justice in this community and throughout the world,” Francis said, standing before an underground floodwall that became a symbol of New York’s resilience when it held fast after the attacks.

Elizabeth Holmes and Nancy Mercado were among the 1,000 people at the memorial pool, invited because they worked on the Sept. 11 recovery effort. The two women have been together for 25 years and married when it became legal in New York in 2011.

She added: “I already feel more welcome. I don’t feel as stigmatized. I feel like I’m part of the community again.”

Francis’ plans for Friday afternoon reflected the penchant of the “people’s pope” for engaging with the public.

The agenda included a visit to Our Lady Queen of Angels School, set amid public housing in the heavily Hispanic neighborhood of East Harlem.

Later, he was to greet as many as 80,000 onlookers during a drive through Central Park, en route to Mass for 18,000 at Madison Square Garden.