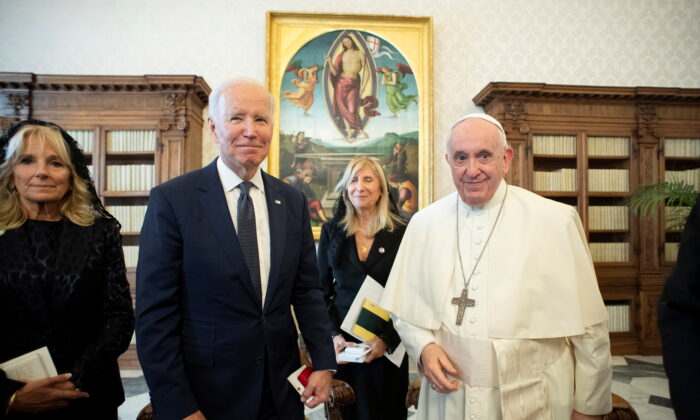 Pope Francis has criticized President Joe Biden for his stance on abortion, which contradicts the president’s Catholic faith, weeks after the Vatican praised the U.S. Supreme Court for overturning Roe v. Wade.

“A month after conception, the DNA of the fetus is already there and the organs are aligned. There is human life,” the pope said in an interview with Univision. “Is it just to eliminate a human life?”

The pope went on to advise Biden to meet with his priest.

“I leave it to [President Biden’s] conscience and that he speaks to his bishop, his pastor, his parish priest about that incoherence,” the pope said.

In June, the Pontifical Academy for Life at the Vatican issued a statement hailing the Supreme Court’s abortion decision. It said that the defense of human life cannot be solely limited to the realm of individual rights since life itself is a matter of “broad social significance.”

At a time when Western society is losing its “passion for life,” the Supreme Court decision is a “powerful invitation to reflect” on the issue, said Archbishop Vincenzo Paglia, president of the Pontifical Academy for Life.

Biden and his family members attend Holy Trinity Catholic Church in the Archdiocese of Washington, which is overseen by Cardinal Wilton Gregory. The cardinal has stated that excommunication should be a last resort to resolve the issue of a Catholic politician who is pro-abortion and has not denied communion to Biden.

In May, Speaker of the House Nancy Pelosi (D-Calif.) was barred from receiving Holy Communion by San Francisco Archbishop Salvatore Joseph Cordileone due to her support for abortion.

Biden said it was a “sad day” for the United States when the Supreme Court overturned Roe v. Wade, calling the conservative members of the court “extreme” in his remarks.

Speaking to reporters on July 10, Biden said that he’d asked his advisers to determine whether he has the authority to declare a public health emergency on abortions, thereby ensuring the use of federal resources to promote abortion access.

In the majority opinion for the Roe v. Wade ruling, Supreme Court Justice Samuel Alito observed that the U.S. Constitution does not prohibit the citizens of each state from regulating or prohibiting abortion.

“The Constitution makes no reference to abortion, and no such right is implicitly protected by any constitutional provision, including the one on which the defenders of Roe and Casey now chiefly rely—the Due Process Clause of the Fourteenth Amendment,” he stated.