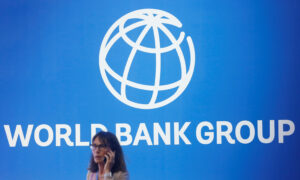 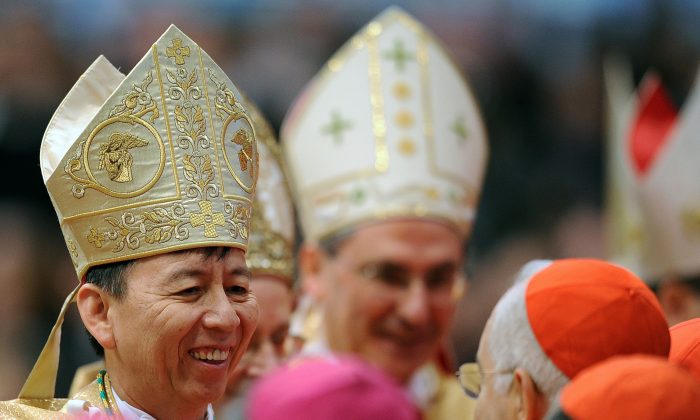 Archbishop Savio Hon Tai-Fai the Secretary of the Congregation for the Evangelization of Peoples has been removed from his powerful post by Pope Francis. This stock photo shows then-Bishop Hon surrounded by prelates during a holy mass celebrated by Pope Benedict XVI at the Vatican on Feb. 5, 2011. (Alberto Pizzoli/AFP/Getty Images)
International

A senior archbishop known for his strong opposition to the Communist regime in China has been removed from a key post in the Vatican by Pope Francis. The move is the latest in a series of overtures Pope Francis has made in recent years to seek resumption of diplomatic relations between the Vatican and the Chinese regime, which has always rejected the Pope’s authority to appoint Catholic bishops in Mainland China.

Pope Francis made the surprise announcement on Sept. 28 that Archbishop Savio Hon Tai-Fai, the Secretary of the Congregation for the Evangelization of Peoples (Propaganda Fide) at the Vatican, will be reassigned to Athens, Greece to serve as the Vatican’s papal nuncio (diplomat). The 67-year-old Archbishop from Hong Kong, who has been the highest-ranking official of Chinese origin in the Vatican, has no prior diplomatic experience.

As the French newspaper La Croix noted, Archbishop Hon has been one of the most senior bishops opposed to Pope Francis’ policy of rapprochement with the Chinese regime. His position at the Vatican’s Propaganda Fide, where he served for seven years since being appointed there by previous Pope Benedict XVI in 2010, was a powerful post as that put him second-in-command in the Vatican body that directly governs Vatican’s missionary works.

The Vatican and the People’s Republic of China have had no diplomatic relations since 1951, as the Chinese Communist Party insisted from the very beginning of its rule that all bishops of the Roman Catholic Church in mainland China should be appointed by itself so as to maintain control. Instead, a regime-controlled Chinese Patriotic Catholic Association (CPCA) was created to supposedly represent Catholics in China, yet the CPCA has never been recognized by the Vatican.

Since Pope Francis was elected in 2013, however, he has made numerous overtures to open diplomatic relations, such as a Papal flight over China in 2014, and an announcement in February of this year that an agreement over the issue of the power to appoint Bishops has been reached with Beijing, among other events.

Archbishop Hon is known for being a close ally to Cardinal Joseph Zen, the respected former Bishop of Hong Kong who retired in 2009. Just like Hon, Zen has been a staunch opponent of the Chinese regime and its many violations of human rights and religious freedom. In recent years, Zen has emerged as the most prominent critic of Pope Francis’ approach with Beijing.

“Finally they got rid of him! But Greece is not further away from Rome than Hong Kong!?” Joseph Zen wrote in his blog in response to Pope Francis’ decision to remove Hon.

Now age 85, Zen undertook a high profile visit across the United States and Canada this week, and repeatedly criticized what he claimed to be Pope Francis and the Vatican officials’ misguided optimism when it comes to a deal with the Chinese regime.

“The Chinese government has not made any concessions in the negotiations,” he told the Chinese-language World Journal in New York on Sunday. “[Pope Francis] does not understand the Chinese Communist Party at all.”

Archbishop Hon’s removal shows that Pope Francis has made up his mind on the issue of opening relations with the Chinese regime and is not listening to any opposing view, according to Zen.

The Vatican has yet to respond to the latest remarks by Cardinal Zen, and The Epoch Times’ repeated phone calls to the Vatican’s Press Office to request for comment have not been answered.