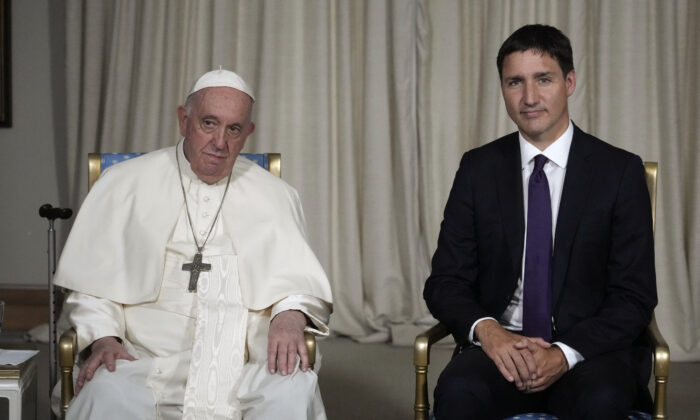 Pope Francis met privately with Canadian Prime Minister Justin Trudeau and gave a courtesy visit to Governor General Mary Simon at her residence, the “Citadelle de Québec,” located in Quebec City, on the afternoon of July 27, according to the prime minister’s daily itinerary.

Unlike Pope Francis’s activities in Alberta on July 25 and 26, his meeting with the prime minister was not streamed live on the Vatican website’s “Activities of the Holy Father” media centre.

Pope Francis’s meeting with Trudeau came on the fourth of his six-day “apostolic journey” to Canada. It is the pope’s first day in a province other than Alberta, as he spent his first three days in the Edmonton area and at the pilgrimage site, Lac Ste. Anne.

Pope Francis called his visit to Canada “a penitential pilgrimage” while speaking to First Nations, Métis, and Inuit peoples at Maskwacis, Alberta, on July 25. The Supreme Pontiff apologized for the Catholic Church’s involvement in the Residential School System and said he will “continue to encourage the efforts of all Catholics to support the indigenous peoples.”

“I trust and pray that Christians and civil society in this land may grow in the ability to accept and respect the identity and the experience of the indigenous peoples,” he said.

The pope will publicly meet with civil authorities and representatives of indigenous peoples and members of the diplomatic corps after his meeting with the prime minister on July 27.

He will fly back to Rome on July 29 after a stop in Iqaluit.