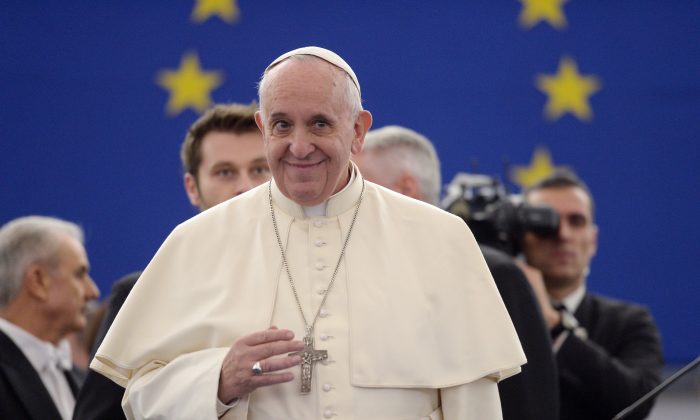 STRASBOURG, France—The EU raised the flag of the Vatican next to the 28 EU member states at the European Parliament in Strasbourg on Tuesday in anticipation of Pope Francis’s first visit.

During the Pope’s address to the Parliament, he spoke of the challenges facing the EU today: immigration, environmental degradation, violent extremism, economic distress, and distrust in the EU’s institutions.

He called on European politicians to put human dignity at the center of their policies, saying EU institutions are perceived as aloof and their policies “insensitive to individual peoples, if not downright harmful.”

He said that to have Europe revolve around the sacredness of the human being would make Europe a natural leader in the world: “a Europe which contemplates heavens and pursues lofty ideals,” he said, “a Europe which cares for, defends, and protects man, every man and woman.”

However he cautioned against the trend of promoting individual rights at the expense of society as a whole.

“Unless the rights of each individual are harmoniously ordered to the greater good, those rights will end up being considered limitless and consequently will become a source of conflicts and violence,” he said.

This trend has bred selfish lifestyles and an opulence that is no longer sustainable, he said. He said that another symptom of this trend toward individualism is loneliness, which he called “one of the most common diseases in Europe today.”

As for the rise of violent extremism in the world, the Pope said it was due to a spiritual deficit.

“Man’s forgetfulness of god and not giving him glory gives rise to violence,” he said.

Acknowledging the problems facing the EU, he said there was great hope, “based on the confidence that our problems can become powerful forces for unity.”

This was the Pope’s first visit to Strasbourg and his second visit to Europe since he took the papacy in March 2013.

The last Pope to visit the EU Parliament before him was John Paul II in 1988. At that time, the Soviet Union was still intact, and the cold war had divided Europe.

“Since then, much has changed,” the Pope acknowledged.

“Gradually the hope is being realized that ‘Europe, endowed with sovereign and free institutions, will one day reach the full dimensions that geography, and even more, history have given it,'” he said, quoting the speech of John Paul II during his visit to the EU Parliament 26 years ago.