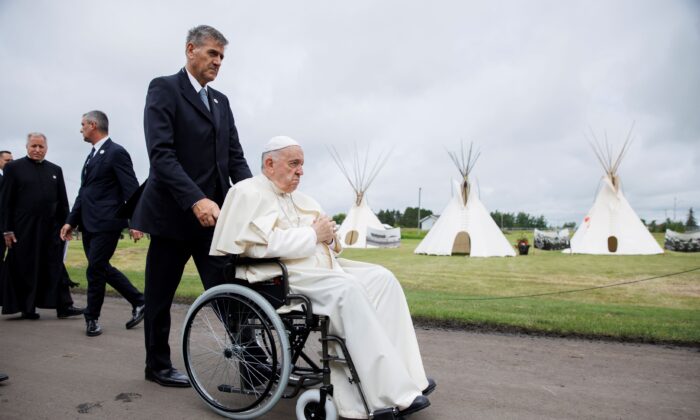 Pope Francis at the site of the former Ermineskin Residential School in Maskwacis, Alta., during his visit to Canada on July 25, 2022. (Photo by Cole Burston/Getty Images).
Canada

Pope Francis celebrated Mass before a crowd of thousands at Edmonton’s Commonwealth Stadium on the morning of July 26 as he began the third day of his papal visit to Canada.

The Supreme Pontiff of the Roman Catholic Church will participate in the annual Lac Ste. Anne pilgrimage later this afternoon to continue what he has called his “journey of healing and reconciliation” with Canadian indigenous communities affected by the Church’s involvement in the residential school system.

Lac Ste. Anne, a large lake just west of Edmonton, is the site of an annual pilgrimage attended by up to 40,000 participants, making it the “largest annual Catholic gathering in Western Canada,” according to the pilgrimage’s website. The pilgrimage is significant for the pope’s visit as a large portion of its attendees are usually of First Nations and Métis descent, and the lake is also home to the Alexis Nakota Sioux Nation.

A week before the Pope’s visit, Alberta Health Services (AHS) encountered a problem with the pilgrimage site when they discovered an increased presence of blue-green algae in Lac Ste. Anne. AHS told residents and pilgrims in an advisory to avoid wading or swimming in parts of the lake where the algae is visible.

“We acknowledge that this lake is of high significance to many people, and we anticipate that it will be visited by large numbers of people next week as part of the Papal visit,” read the advisory.

AHS has installed cleansing stations near the lake to reduce visitors’ risk of suffering from the algae’s harmful effects.

Pope Francis’s pilgrimage comes a day after he delivered a formal apology on behalf of the Catholic Church to Canadian indigenous communities at Maskwacis, Alberta.

“I would like to begin what I consider a pilgrimage, a penitential pilgrimage,” he said in part.

“I have come to your native lands to tell you in person of my sorrow, to implore God’s forgiveness, healing and reconciliation, to express my closeness and to pray with you and for you.”