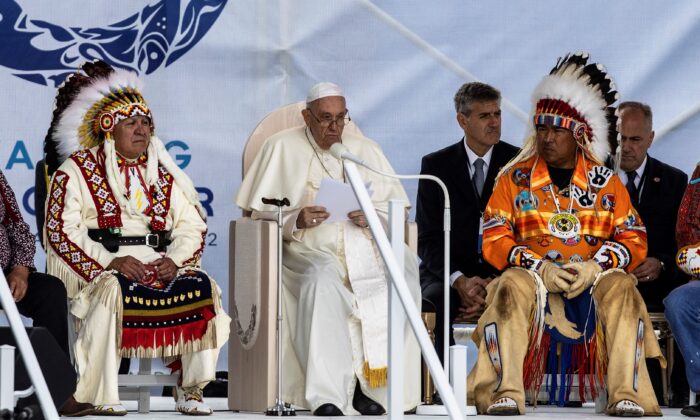 Pope Francis apologizes for the Roman Catholic Church’s role in the residential school nsystem, in Maskwacis, Alta., during his papal visit across Canada on July 25, 2022. (The Canadian Press/Jason Franson)
Canada

Pope Francis apologized for the Catholic Church’s involvement in Canada’s residential school system before a crowd of hundreds of indigenous people and leaders in Maskwacis, Alberta, on the morning of July 25.

This comes on the second day of Francis’s visit to Canada, during which time he will meet with indigenous peoples and leaders in Alberta, Quebec, and Iqaluit, according to his Apostolic Journey itinerary.

The Supreme Pontiff of the Roman Catholic Church told reporters on the flight from Rome to Edmonton that his visit will have a sombre tone.

‘Let us be careful on this journey … it is a penitential journey, let us undertake it in this spirit,” he said.

During Pope Francis’s formal apology in Maskwacis on July 25, he said he is deeply sorry for any harm the church caused indigenous peoples and that it will continue taking steps toward making amends, including an investigation into the alleged abuses that occurred.

“I have come to your native lands to tell you in person of my sorrow, to implore God’s forgiveness, healing, and reconciliation, to express my closeness and to pray with you and for you,” he said.

This is the second formal apology Pope Francis has offered for the Catholic Church’s involvement in mistreatment of indigenous students in the residential school system. He delivered an apology before almost 200 indigenous delegates at the Apostolic Palace in Rome on April 1, 2022.

At that time, however, certain indigenous groups requested the Pope apologize on Canadian soil.

The Inuvialuit Regional Corporation, representing several indigenous communities in the Northwest Territories’ Inuvialuit Settlement Region, declined the Vatican’s invitation to attend Francis’s Iqaluit visit on the grounds that the Catholic Church has not yet apologized for its “past wrongs” in the residential school system.

During his July 17 Angelus address at the Vatican, Pope Francis referenced his April 1 apology to Canada’s indigenous peoples, saying he “recently received … representatives of indigenous peoples, to whom I expressed my sorrow and solidarity for the harm they have suffered.”

“I am about to embark on a penitential pilgrimage [to Canada], which I hope, with God’s grace, will contribute to the journey of healing and reconciliation already undertaken,” he said.

Pope Francis’s visit will last six days and span three provinces. He will stay in Alberta for two days, during which time he will greet First Nations, Métis, and Inuit communities in Maskwacis, before flying to Quebec on July 27.

In Quebec, the Pope will meet with Representatives of Indigenous Peoples and Members of the Diplomatic Corps, along with Prime Minister Justin Trudeau and Gov. Gen. Mary Simon, at the Citadelle de Québec.

Pope Francis will finish his visit by spending half a day in Iqaluit, where he will attend a private meeting with former residential school students and indigenous elders in the province’s primary school square.