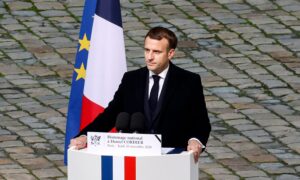 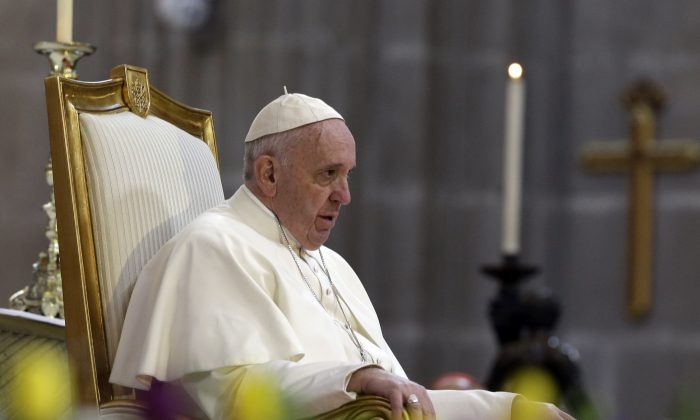 Pope Francis meets with bishops during his visit at the National Cathedral in Mexico City on Feb. 13. (AP Photo/Gregorio Borgia)
Europe

VATICAN CITY—Pope Francis on Sunday urged Catholic leaders to show “exemplary” courage by not allowing executions this year, while expressing hope that eventually the death penalty will be abolished worldwide.

Francis told tourists and pilgrims in St. Peter’s Square that “the commandment ‘do not kill’ holds absolute value and applies to both the innocent and the guilty.”

He added that there is “an ever more widespread opposition in public opinion to the death penalty, even only as an instrument of legitimate social defense.”

“I appeal to the conscience of those who govern so that international consensus is reached for the abolishment of the death penalty,” the pope said. “And I propose to all those among them who are Catholic to make a courageous and exemplary gesture: may no execution sentence be carried out in this Holy Year of Mercy.”

Video: Pope Francis Says Trump is ‘Not a Christian” for Plans to Build a Wall

Trump Calls the Pope ‘Disgraceful’ in Spat Over Border Wall

Francis is using the church’s Holy Year, which runs through Nov. 20, to encourage efforts for more reconciliation and mercy in the world.

Francis called on all Christians and all those of good will to work not only to abolish capital punishment but also to improve prison conditions.

From the start of his papacy, he has expressed concern that inmates in jails and prisons should be treated with dignity. He has often visited prisons during his trips throughout Italy and abroad, including last week while in the border city of Ciudad Juarez, Mexico.

While the pope insists he doesn’t interfere in the political sphere, he has also made clear people must follow what he calls a “well-informed” conscience, and that local bishops can give guidance to Catholics, including voters, on political issues.