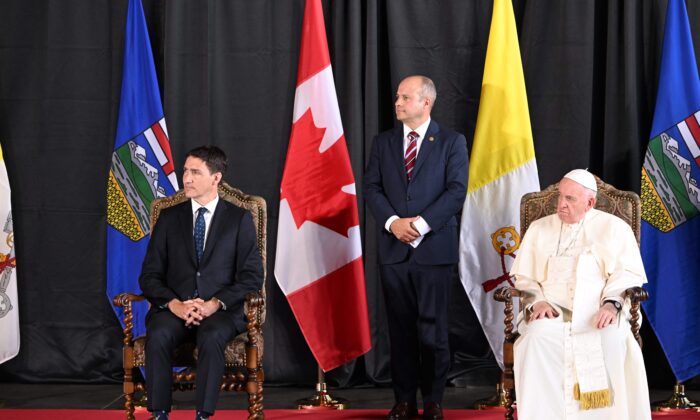 EDMONTON—Pope Francis has arrived in Canada to embark on what he describes as a “penitential” trip aimed at reconciliation with indigenous people for the Catholic Church’s role in residential schools.

The Pope told reporters on a plane before it landed in Edmonton on Sunday that the six−day visit must be handled with care.

The pontiff is also set to travel to Quebec City and Iqaluit.

“I hope, with God’s grace, that my penitential pilgrimage might contribute to the journey of reconciliation already undertaken. Please accompany me with #prayer,” said a message on the Pope’s Twitter account.

Francis was greeted at the Edmonton airport by Prime Minister Justin Trudeau and Gov. Gen. Mary Simon, as well as other church, indigenous, and political dignitaries.

He was next to travel to the St. Joseph Seminary, where he will be staying during the Alberta portion of the trip.