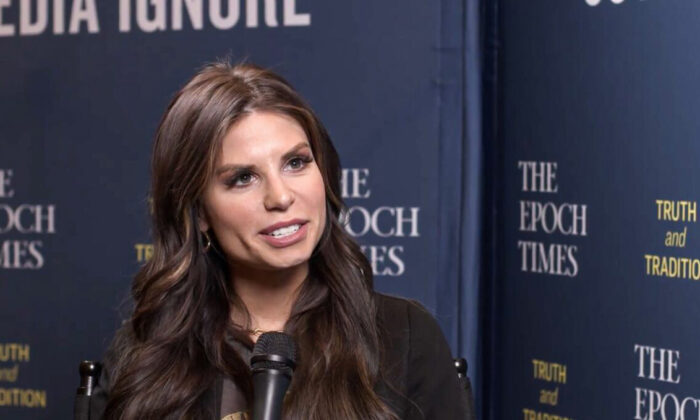 POPlitics and Spillover Host Alex Clark in an interview with The Epoch Times at a TurningPointUSA event in Phoenix, Ariz., in December 2021. (The Epoch Times)
Politics

Alex Clark, host of the shows POPlitics and Spillover, told The Epoch Times that she had to carve her own path as the conservative host of a show on pop culture, and that she wants to inspire young people to embrace their individual passions to expand the conservative movement.

“Really lean into what makes you special and unique and different, even if you’re super weird because I’m like the weirdest person ever. And that’s honestly what some people hate about me. But most of all, I would say [what] 90 percent love about me and about my shows [is] it feels like you really know me,” Clark told The Epoch Times during a recent interview at Turning Point USA’s America Fest.

“So being yourself, and leaning into that and finding your niche, whatever you’re passionate about. I’m passionate about pop culture. I wanted a show that didn’t exist. So, I created it. If there’s something missing in the conservative movement that you want, create it,” Clark said.

“So, when I was looking at the landscape on the right … for inspiration on how to build the show, it didn’t exist. So, everything that we had spent months creating when it came to the show POPlitics, we did from scratch. We had to figure it out.”

A Turning Point USA contributor, Clark’s shows cover pop culture news in a lighthearted way and topics of the day that she is interested in, all while staying true to her conservative values.

“It’s more important to have 50 followers that you impact so much, that they’re willing to go out into their communities and get other girls together,” she said.

She told The Epoch Times that her goal was to fill a void in conservative media and news and share her genuine appreciation for pop culture while still being able to critique it. She believes this is something young conservatives can relate to her for.

Talking about celebrities like singer/songwriter Taylor Swift, Clark said, “I think my concerns are genuine, and then my love for them … it’s also genuine. And that resonates with a lot of young women and they find that relatable.”

Clark is grateful for her loyal fan base who she says are ready to change how they are perceived. She said she has met young conservative women from hundreds of groups throughout the United States who have expressed appreciation for her shows.

“They’re angry and they’re tired of being pushed around as young women by the left, of course, but also by the conservative movement,” Clark said. “[They’re] tired of feeling like they don’t belong for loving, yes, the conservative politics, but also loving pop culture and loving fashion.”

Nicholas VandenNieuwenhof contributed to this report.